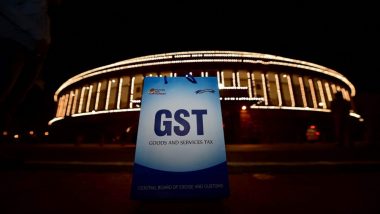 New Delhi, July 1:  GST Day is celebrated every year on July 1. The GST  was launched at midnight on July 1, 2017 by the Government of India. The launch was marked by a historic midnight (30 June – 1 July) session of both the houses of parliament convened at the Central Hall of the Parliament. This year marks the 3rd anniversary of implementation of historic tax reform of Goods & Services Tax. At present, the types of GST in India are CGST, SGST and IGST. The GST is a value-added tax levied on most goods and services sold for domestic consumption. It is paid by consumers, but it is remitted to the government by the businesses selling the goods and services.

The GST rate in India for various goods and services is divided under 4 slabs; these are 5% GST, 12% GST, 18% GST, and 28% GST. However, there are some products that do not carry any GST rate. The 5% GST tax slab includes  essential commodities such as food items, footwear and basic clothing.

In 2019, GST rate hiked on caffeinated drinks to 28% from 18%. The GST rate on hotel tariffs from Rs 1000-Rs 7500 fixed at 12%. Consumer durables, cement, chewing gum, custard powder, perfume, shampoo, make-up, fireworks and motorcycle attract 28% GST.  Check the complete list of GST rates and revisions here. You can also check the current GST slabs on the official GST Council website. Click for the direct link for CGST rates for Goods and GST Rates for Services.

In the 40th Goods and Services Tax (GST) Council meeting held on June 12 by Finance Minister Nirmala Sitharaman, zero late fees for taxpayers who have not filed their returns from July 2017 to January 2020 was announced, given that they have no tax liability. Further, the interest rate on late filing has been reduced from 18% to 9% per annum for small taxpayers. In the 39th GST council meeting was held on March 14, 2020 in Delhi, mobile phones were placed in the 18% slab from 12%.

Under the current slab, food /drinks at restaurants with AC/heating attract 18% GST. The GST rates on all the personal use vehicles have been fixed to 28%. Entertainment events-amusement facility, water parks, theme parks, joy rides also attract 28% GST. The GST rate for handwoven baskets made from plastic straps is 5%.

(The above story first appeared on LatestLY on Jul 01, 2020 09:00 AM IST. For more news and updates on politics, world, sports, entertainment and lifestyle, log on to our website latestly.com).