Independence Day 2022: PM Narendra Modi To Hoist Tricolour for The 9th Time; Look Back at All Former Prime Ministers of India Who Hoisted National Flag at Red Fort 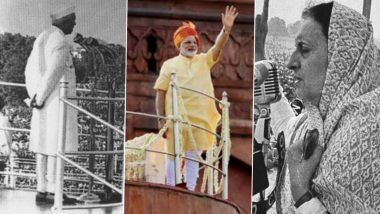 Mumbai, August 14: PM Narendra Modi is all set to hoist the national flag at the Red Fort in Delhi for the 9th consecutive time since he became the Prime Minister of India in 2014. Following the flag hoisting, PM Modi will address the nation, a legacy that has been carried around since Pandit Nehru hoisted the flag and gave a speech on the Red Fort for the first time in 1947.

The historic Mughal monument has seen Pandit Nehru, the first Prime Minister of independent India, unfurling the national flag 17 times. He was the longest-serving Prime Minister of the nation holding the post from 1947 to 1964. Independence Day 2022: Why India Celebrates I-Day on August 15? Know History Behind Why THIS Date Was Chosen Specifically.

Pandit Nehru is followed by his daughter Indira Gandhi, who got the honour 16 times. The Iron Lady of India served as PM from 1966 to 1977 and again from January 1980 until her assassination in October 1984. Gandhi is the only female to ever hold Prime Minister's office.

Dr. Manmohan Singh became the third PM and the first outside the Nehru-Gandhi clan to hoist the Tiranga 10 times. Singh was PM of India from 2004 to 2014.

Rajiv Gandhi and Narasimha Rao hoisted the national flag 5 times each at the Red Fort. Gandhi held the PM's office from 1984-89, while Rao held power from 1991-96.

Apart from this, Lal Bahadur Shastri (1964-66), Chaudhary Charan Singh (1979-80), Vishwanath Pratap Singh (1989-90), H.D. Deve Gowda (1996-97), Inder Kumar Gujral (1998-99) were fortunate enough to hoist the flag once. While Gulzarilal Nanda and Chandra Shekhar never got the opportunity to hoist the national flag during their stints as Prime Ministers.

(The above story first appeared on LatestLY on Aug 14, 2022 09:34 PM IST. For more news and updates on politics, world, sports, entertainment and lifestyle, log on to our website latestly.com).