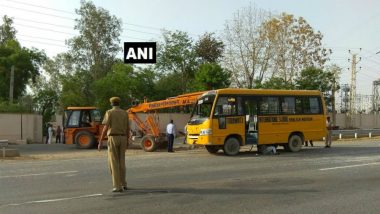 Jaipur, May 7: School children getting injured on roads in India due to school bus and vehicle collisions are becoming a disturbing and tragic fact in present times. In the latest such incident, around 25 children were injured in a collision between a school bus & a private bus on Delhi-Jaipur Highway in Jaipur's Kotputli reported news agency ANI. The injured school children have been admitted to a nearby government hospital. The recent school bus accidents cast a scary picture about the safety on young lives on Indian roads. The data by SaveLife Foundation report says that 17 people die every hour on Indian roads and that 29 children lose life in India everyday due to road accidents.

This news comes just days after the tragic Kushinagar school van accident that was rammed by a train after the driver was reportedly talking on the phone over earphone and the railway crossing was unmanned. More information is awaited on the accident that has taken place between the school bus and another vehicle in Jaipur:

Around 25 children injured in a collision between a school bus & a private bus on Delhi-Jaipur Highway in #Jaipur's Kotputli, admitted to nearby government hospital. More details awaited #Rajasthan pic.twitter.com/myx3n28pLI

According to a data by SaveLIFE Foundation, 29 children die in road accidents in India every day. "India is no. 1 in road crash deaths and injuries in the world," says a Global Status Report on Road Safety, 2015, published by World Health Organization. The report mentions several other data related to road accidents in India that should be a major cause of concern for the government and road safety authorities.

(The above story first appeared on LatestLY on May 07, 2018 10:01 AM IST. For more news and updates on politics, world, sports, entertainment and lifestyle, log on to our website latestly.com).