More details on the same are awaited. 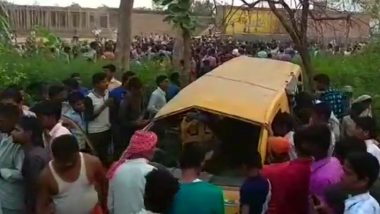 Kushinagar (UP), April 26: In a very heartbreaking incident that has just come in from Uttar Pradesh,  at least 14 school students have died and around 7 are left critically injured as the vehicle in which they were travelling collided with a train at an unmanned crossing in Kushinagar, according to reports from ANI.

According to a report on ANI, Chief Minister Yogi Adityanath has expressed his deepest condolences on this very unfortunate incident and directed District Administration to provide all help & medical aid. He has even declared an ex-gratia of Rs 2 lakhs and has ordered for an inquiry into the cause of the accident.

#FLASH: 11 school students dead after the vehicle they were travelling in collided with a train at an unmanned crossing in Kushinagar. pic.twitter.com/49z8UB64KL

Total 18 school students were travelling in the vehicle out of which 11 have died, many of the rest 7 are critically injured, death toll may go up: Anand Kumar, ADG (Law and Order) on #Kushinagar accident pic.twitter.com/FBgKG5di3B

According to a Better India article highlights a shocking statistics, which says that India has more than 30,000 level-crossings at which vehicles can cross the railway tracks. Of these, more than 11,000 are unmanned crossings, and this is where most of the accidents occur. Therefore, the Indian Railways had collaborated with the Indian Space Research Organisation (ISRO), to warn road users through hooters once a train approaches an unmanned level crossing.

Earlier this month, more than 27 school children were reported dead after a bus ferrying them fall into a gorge in Himachal Pradesh's Kangra district. The accident was reported from Nurpur area in Kangra, where a private bus ferrying 40 school students skidded off the highway and plunged into a deep gorge. The children, enrolled in the Wazir Ram Singh Memorial School, were being dropped back home when the accident occurred.

(The above story first appeared on LatestLY on Apr 26, 2018 08:33 AM IST. For more news and updates on politics, world, sports, entertainment and lifestyle, log on to our website latestly.com).