‘Padmaavat’ Movie Controversy: Protesters Vandalise Theatre in Gujarat’s Ahmedabad Ahead of Its Release 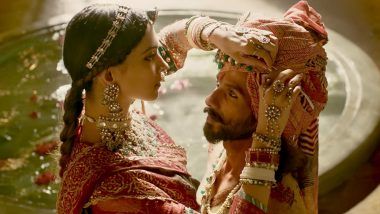 Ahmedabad, January 21: Angry protesters on Saturday attacked a cinema hall in Gujarat’s Ahmedabad city against screening of Sanjay Leela Bhansali’s controversial film ‘Padmaavat’. The incident comes days after theaters in Haryana and Bihar were vandalized by similar groups.  According to a report by ANI, protesters vandalised Rajhans Cinemas in Ahmedabad late Saturday night.

While speaking to ANI, Rakesh Patel, director of Gujarat Multiplex Association, said, “We have decided not to screen the movie in whole of Gujarat. Everyone is scared, No multiplex wants to bear the loss. Why will we bear the loss?”

We have decided not to screen the movie in whole of Gujarat. Everyone is scared, No multiplex wants to bear the loss. Why will we bear the loss? : Rakesh Patel, Director, Gujarat Multiplex Association #Padmaavat pic.twitter.com/9U3rCCAf98

Despite Supreme Court directive of screening Padmaavat in four states- Rajasthan, Gujarat, Madhya Pradesh and Haryana, few Rajput organisations have stepped up their tirade against screening of the Sanjay Leela Bhansali film. The two Rajput organisations – Karni Sena and Mahakaal Sena – have been at the forefront of protests against the film in Gujarat.  Clearing decks for a pan-India release, the Apex Court in the last week had lifted the ban on Padmaavat. The state government of Gujarat maintains that it will study the Supreme Court order before taking an appropriate decision in the matter.

Padmaavat  sets were vandalised twice- once in Jaipur and second time in Kolhapur.  After a long wait and mounting troubles, the movie is all set to be released on January 25, 2018  It will be released in Hindi, Telugu, and Tamil and will be the first Indian film to get a global IMAX 3D release.  The Rajput Karni Sena on Saturday said, if ‘Padmaavat’ was allowed to get released on January 25, the day would be recorded as the black day in the history.

The Rajput group has however, warned that if film theatres did screen ‘Padmaavat’ then they would do so at their own risk. “We are appealing to the movie theatres that if they are releasing the film then they should release it at their own responsibility. We also appeal to the public not to come out of their house on January 25,” Pune Karni Sena President Om Singh Bhati said while addressing a press conference in Pune on Saturday.

(The above story first appeared on LatestLY on Jan 21, 2018 02:16 PM IST. For more news and updates on politics, world, sports, entertainment and lifestyle, log on to our website latestly.com).