The Madhya Pradesh Police on Wednesday registered a case against Trinamool Congress MP Mahua Moitra for her controversial remarks on Goddess Kali. 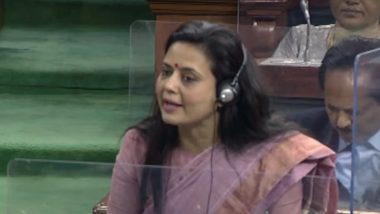 The development came after Chief Minister Shivraj Singh Chouhan condemned Moitra's remarks, saying, "The statement was made with the sole intention of demeaning Goddess Kali."

Moitra triggered a row on Tuesday while addressing a conclave where she said that she had every right as an individual to imagine Goddess Kali as meat-eating and alcohol-accepting goddess, as each person had his or her unique way of worshipping deities.

Chouhan alleged that Moitra deliberately made the remarks without knowing anything about Hindu religion and religious beliefs.

The Chief Minister added that Moitra's statement has hurt the religious feelings of Hindus.

"We will not tolerate disrespect towards Hindu gods and goddesses at any cost," he added.

The police have confirmed registering an FIR against Moitra, though its copy has not been made public.

Apart from Madhya Pradesh, the Bengal unit of the BJP has also filed two complaints against Moitra for 'insulting' Goddess Kali.

While the first complaint was lodged by some BJP workers on Wednesday morning, the second was lodged by Bengal BJP leader Rajarshi Lahiri at the Rabindra Sarobar police station, as per reports.

(The above story first appeared on LatestLY on Jul 06, 2022 06:37 PM IST. For more news and updates on politics, world, sports, entertainment and lifestyle, log on to our website latestly.com).