Congress leader Shashi Tharoor has come out in defence of Trinamool Congress MP Mahua Moitra backing her on her comments on goddess Kali which led to a huge controversy in West Bengal. 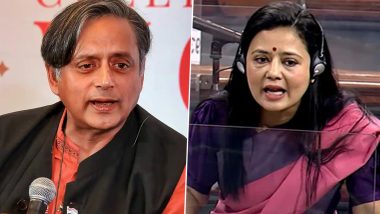 New Delhi, July 6: Congress leader Shashi Tharoor has come out in defence of Trinamool Congress MP Mahua Moitra backing her on her comments on goddess Kali which led to a huge controversy in West Bengal. Tharoor said that her intention was not to hurt any body's sentiment and religion should be left for individual practice.

Tharoor in his tweet said, "I am no stranger to malicious manufactured controversy, but am still taken aback by the attack on @MahuaMoitra for saying what every Hindu knows, that our forms of worship vary widely across the country. What devotees offer as bhog says more about them than about the goddess." TMC's Mahua Moitra Booked over Comment on Goddess Kali

"We have reached a stage where no one can say anything publicly about any aspect of religion without someone claiming to be offended. It's obvious that @MahuaMoitra wasn't trying to offend anyone. I urge every1 to lighten up and leave religion to individuals to practice privately," Tharoor said further.

However, the Congress has categorically said that party does not approve anyone hurting religious sentiments of others.

Abhishek Manu Singhvi, party's senior spokesperson in Bengaluru said during a press conference, "I don't want to comment on other parties, but a balance must be maintained in symbols and essence of our faith and people must be careful when they play with emotions of people which are reflected in such symbols, culture and faith."

The development is a likely fallout of her growing differences with the party leadership over her comments about Goddess Kali at a recent media conclave in Kolkata.

While responding to a question on a controversial film poster showing a woman decked as Goddess Kali smoking, Moitra said that for her Goddess Kali is a meat-eating and alcohol accepting goddess. In support of her arguments, she drew the reference of the iconic Tarapith Shakti Peeth temple in West Bengal's Birbhum district, where meat and alcohol are offered while worshipping Goddess Kali's "Maa Tara" version.

Her remarks evoked strong criticism by the state BJP leaders who described Moitra's comments as an insult to the traditional Hindu religion. The BJP leaders even demanded Mamata Banerjee to take action against her party MP. As things started getting serious, Trinamool Congress leadership distanced itself from the comments of the outspoken party MP and also issued a Twitter message condemning the comments of Moitra on this count.

(The above story first appeared on LatestLY on Jul 06, 2022 05:59 PM IST. For more news and updates on politics, world, sports, entertainment and lifestyle, log on to our website latestly.com).