The "entire" Lakshadweep was, on Monday, undergoing a 12 hour hunger strike against the Union Territory administration and Administrator Praful Khoda Patel who was bringing in "anti-people" policies, protesters said. 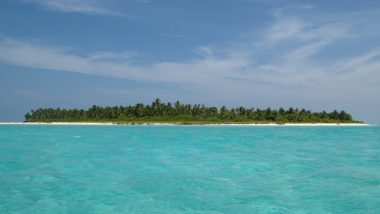 Thiruvananthapuram, June 7: The "entire" Lakshadweep was, on Monday, undergoing a 12 hour hunger strike against the Union Territory administration and Administrator Praful Khoda Patel who was bringing in "anti-people" policies, protesters said.

Talking to IANS over telephone from the island, a 60-year-old resident, who did not want to be identified, said this is the first time in his entire life he is seeing such a protest. Who Is Praful Khoda Patel, Lakshadweep Administrator Facing Protests?

"Monday is being observed as a complete lockdown and all shops, and private establishments are closed while the vehicles are also off the road. All of us are sitting in our homes and are on a day long hunger strike since morning," he said.

Even BJP workers had joined the protest, he said.

"We are not at all against any sort of development. All what we are saying is every place in the world cannot be made into a modern day Singapore. Coral reef is something that has to be protected... we and our forefathers have been preserving it for ages. Don't we know what we want or is it someone who comes from elsewhere decides what development we need," asked the angry islander.

Another islander said the development the new administrator is talking about is "doubtful".

"I know there are so many projects that have been proposed in the past which will bring in development. Wish to know why such projects which are sustainable in nature are not taken up and only the ones that are now proposed will be good. This attitude is what we oppose," said the islander on condition of anonymity.

However District Collector S. Asker Ali told IANS that all the state government offices were open and functional.

Meanwhile, parlimentarians of the Congress-led UDF staged a protest in front of the district office of Lakshadweep at Kochi as a mark of support to the islanders' day-long hunger strike.

(The above story first appeared on LatestLY on Jun 07, 2021 07:21 PM IST. For more news and updates on politics, world, sports, entertainment and lifestyle, log on to our website latestly.com).