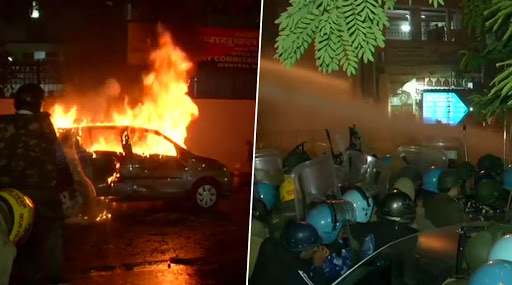 New Delhi, January 9: A Delhi court on Thursday granted bail to 15 people accused of resorting to violence while protesting against the Citizenship Amendment Act (CAA) in Daryaganj last month. The accused, who had no past criminal antecedents, were released by the judge on a bail bond. The prosecution had earlier told the bench that it was analysing CCTV footages and videotapes of media houses to pile evidence against them.

The bail plea was earlier moved by the accused before the Tis Hazari Additional Sessions court. Their petition was, on Wednesday, transferred to the District Judge (Central). Notably, the Additional Sessions Court had dismissed their pleas on December 28. Seemapuri Violence: Delhi Police Arrest 5 Including 2 Bangladesh Nationals For Vandalism During Anti-CAA Protests in East Delhi.

The 15 accused were arrested on December 20, after the agitation called against the Narendra Modi government's citizenship law ended in incidents of vandalism and stone-pelting. The Delhi Police had detained scores of youths who were part of the protest, and decided to lodge a case against the 15 accused for allegedly being part of the violence.

Apart from the 15 accused who were granted bail today, the Delhi Police had also arrested Bhim Army chief Chandrashekhar Azad for his alleged role in orchestrating the violence. Azad's arrest and denial of bail so far has drawn criticism, with his supporters alleging that his condition has turned "fragile".

The anti-CAA protests erupted across Delhi and other parts of North India in mid-December, following the passage of Citizenship Amendment Bill in the Parliament. The law, in view of the proposed nationwide NRC, has sparked panic and anxiety among a section of Indian Muslims. In neighbouring Uttar Pradesh, 19 anti-CAA protesters were killed as the demonstrations turned violent.