Bengaluru Shocker: Man Strangles Wife to Death With Her Dupatta After She Confronts Him About His Affair

It was alleged that Satish had an extramarital affair and his wife Shwetha knew about it, a police officer said. Cops said that she decided to keep quiet about the affair as it would ruin the family's reputation. 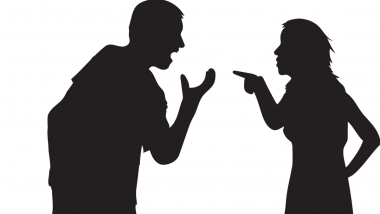 Bengaluru, May 6: The Bengaluru Police recently arrested a 35-year-old man for allegedly killing his wife by strangling her to death. Police officials said that the accused identified as Chowdesh alias Satish worked as a cashier at a private firm.

According to a report in the Hindustan Times, the alleged incident took place after a heated argument broke out between the couple soon after they celebrated the man's birthday. Cops said that the accused strangled his wife Shwetha (30) with her dupatta after she confronted him about his alleged affair. Uttar Pradesh Shocker: Man Arrested After Cops Receive 113 Complaints of Women Harassment From 36 Districts.

Sources from the police said that the accused is a resident of Chunchanaguppe near Nelamangala, where the incident took place in the couple's home. As per reports, after strangling his wife, Satish rushed her to a nearby private hospital. It is still not clear how long the couple was married and whether they have any children.

After checking the victim, doctors suspected foul play as the accused told them that his wife fell unconscious due to low blood pressure. The doctors immediately alerted cops about the case, who interrogated Satish. This is when he confessed to killing his wife.

It was alleged that Satish had an extramarital affair and his wife Shwetha knew about it, a police officer said. Cops said that she decided to keep quiet about the affair as it would ruin the family's reputation. However, Shwetha changed her mind after relatives who suspected the affair asked her about it, and hence, she confronted her husband. Thane Shocker: Man Abuses, Bites On-Duty Cop in Naupada; Arrested.

The two celebrated Satish's birthday and Shwetha even shared a few pictures of the celebrations on WhatsApp. However, a day later, Shwetha confronted her husband about the affair which led to a fight between the two. Amid this, a furious Satish strangled his wife to death.

Police Inspector Rajiv A and his team from Nelamangala Rural Police station are investigating the case, While Sathish has been detained for questioning, further investigation is underway.

(The above story first appeared on LatestLY on May 06, 2022 10:55 PM IST. For more news and updates on politics, world, sports, entertainment and lifestyle, log on to our website latestly.com).