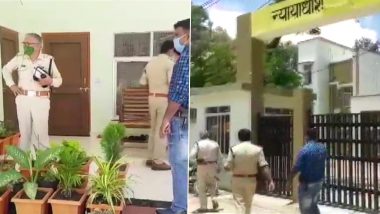 Betul, July 27: An additional district and sessions judge (ADJ) and his 33-year-old son died of suspected food poisoning on Sunday. The deceased judge, ADJ Mahendra Kumar Tripathi, was posted at the Betul district court in Madhya Pradesh. The Betul Police said the judge had complained about some issue with flour they were consuming. However, a criminal conspiracy has not been ruled out and police have launched an investigation. Justice AK Tripathi, Lokpal Member, Dies of COVID-19 Days After Admission to Delhi AIIMS.

On July 22, Tripathi and his two sons- Abhiyanraj and Sonu - complained of uneasiness and diarrhoea and took self-medication. All three were admitted to a private hospital in Betul the next day after their condition deteriorated. While Sonu was discharged on July 24, Tripathi and his elder son's condition continued to deteriorate. They were referred to a private hospital in Nagpur. While Abhiyanraj died on way to the Nagpur hospital, Tripathi succumbed during treatment. Justice Valmiki Mehta, Sitting Delhi High Court Judge, Dies at 60 Due to Cardiac Arrest.

"Tripathi and his sons consumed chapattis (bread) for dinner on July 21 while his wife had taken only rice, not chapatis. On the same day, Tripathi and his sons had some snacks too given by a woman from Rewa, who is known to the family, in the evening," Additional Superintendent of Police Shraddha Joshi was quoted by Hindustan Times as saying. He added that doctors who treated Tripathi and his sons in Betul said the deceased might have consumed some poisonous substance through their food.

Samples of the raw food items including wheat flour from Tripathi's house have been collected and sent to a laboratory to see if it contained some poisonous substance. The police are also looking for the woman, who served snacks to them on July 21 evening. The post mortem reports are also awaited.

(The above story first appeared on LatestLY on Jul 27, 2020 11:14 AM IST. For more news and updates on politics, world, sports, entertainment and lifestyle, log on to our website latestly.com).