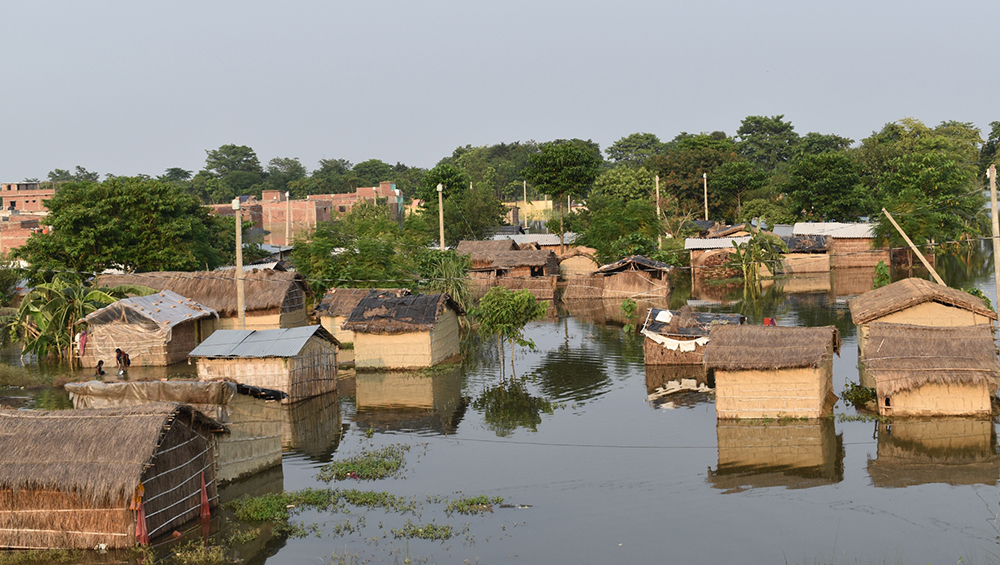 Patna, October 1: Relief and rescue operations were on in full swing in Bihar, including the state capital, on Tuesday as people struggled to recover from the devastation wrought by torrential rain which has claimed close to 30 lives across the state and caused heavy damage to property. Relief material was being distributed by NDRF and SDRF personnel who were reaching out to people marooned inside their homes, helping in relocation of those who so desired, and delivering packets of food, medicines and packaged drinking water to them.

Indian Air Force helicopters hovered over the flooded areas, especially the densely populated ones like Kankar Bagh and Hanuman Nagar in the city, air-dropping packets of relief material as residents stood atop roofs drawing attention of the IAF personnel. Bihar Floods: All Schools in Darbhanga District to Remain Closed Till Further Orders.

Chief Secretary Deepak Kumar has exuded confidence that inundation of streets will be reduced significantly by Wednesday as water would be flushed out with the help of heavy duty pumps brought here from Coal Indias units in Chhattisgarh.

State Building Construction Minister Ashok Chowdhury faced angry outbursts when he reached Kaushal Nagar a slum near the old Gardani Bagh area where residents complained that all relief and rehabilitation work seemed to be centred around posh localities. The minister assured them that he would personally see to it that relief reached every nook and corner.

Many social organisations also volunteered to reach out to the affected citizens. The Patna Sahib Gurudwara situated at the spot where the 10th Sikh Guru Gobind Singh had spent his childhood was also organising community kitchens in several parts of the city. Meanwhile, Union minister Giriraj Singh, who reached his Lok Sabha constituency of Begusarai, launched a caustic attack on the Nitish Kumar government on Tuesday, saying "floods seem to have become an occasion for celebration for the state administration".

"Flood relief has become a huge scam in Bihar, including Begusarai. The district administration had purchased about 300 boats between 2011 and 2014. Only a score of these are in a workable condition," the BJP leader whose party is an alliance partner of the Chief Ministers JD(U) said.

According to the state disaster management department, a total of 14 districts have been hit by flood-like situation caused by torrential rainfall in the past few days, most of these situated along the Ganga.