BrahMos, Nirbhay And Akash Missiles Deployed by India to Counter Chinese Aggression in Ladakh; All You Need to Know About These Standoff Weapons

India has reportedly deployed Brahmos cruise missile, Nirbhay cruise missiles and Akash surface-to-air missile to counter Chinese aggression in the Ladakh Sector. According to a report published in Hindustan Times, China has deployed western theatre command has deployed standoff weapons up to 2,000 km range and long-range SAMs in Tibet and Xinjiang. 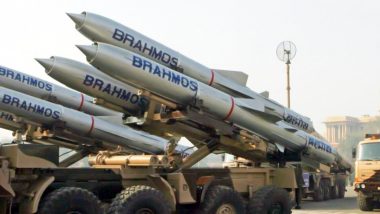 Leh, September 28: India has reportedly deployed Brahmos cruise missile, Nirbhay cruise missiles and Akash surface-to-air missile to counter Chinese aggression in the Ladakh Sector. According to a report published in Hindustan Times, China's Western Theatre Command has deployed standoff weapons up to 2,000 km range and long-range SAMs in Tibet and Xinjiang after the standoff with the Indian Army in Ladakh. China Wants India to Vacate Key Heights Before De-Escalation on LAC: Indian Army Sources.

Notably, India’s deployment of these missiles in the Ladakh sector will counter People’s Liberation Army’s (PLA’s) move. According to the report, China has deployed standoff weapons not only in Aksai Chin but also in areas like Kashgar, Hotan, Lhasa and Nyingchi along the Line of Actual Control (LAC). BrahMos has reportedly been deployed in large numbers in the area.

Here Are More Details About The Three Missiles:

BrahMos Missile: The missile is India’s may standoff weapon. It is an air-to-air and air-to-surface cruise missile. The BrahMos missile is capable of carrying a 300-kilogramme warhead. BrahMos missile can also be delivered from Su-30 MKI fighter jets. Notably, it is a medium-range ramjet supersonic cruise missile that can be launched from submarine, ships, aircraft, or land. It is the fastest supersonic cruise missile in the world. US President Donald Trump Hopes India, China Would Be Able to Resolve Border Differences.

Nirbhay Cruise Missile: It is a long-range all-weather, subsonic cruise missile designed and developed in India by the Aeronautical Development Establishment (ADE). The missile can be launched from multiple platforms and is capable of carrying conventional and nuclear warheads. Currently, India has limited number of Nirbhay Missiles. It has a range that can reach up to 1,000 km.

Akash Missiles: It is a medium-range mobile surface-to-air missile defense system developed by the Defence Research and Development Organisation (DRDO) and produced by Bharat Dynamics Limited (BDL). An Akash battery comprises a single Rajendra 3D passive electronically scanned array radar and four launchers with three missiles each. All these launchers are interlinked.

The situation in eastern Ladakh deteriorated after around 250 Chinese and Indian soldiers were engaged in a violent face-off on the evening of May 5. Over 100 Indian and Chinese soldiers were injured in the violence. The incident in Pangong Tso was followed by a similar incident in North Sikkim on May 9. Notably, India has captured advantageous positions in the southern bank of Pangong Tso lake. China is insisting that India vacates strategic heights on the south bank of Pangong Lake ahead of talks on disengagement on the LAC.

(The above story first appeared on LatestLY on Sep 28, 2020 04:54 PM IST. For more news and updates on politics, world, sports, entertainment and lifestyle, log on to our website latestly.com).