Bulandshahr: Police Celebrate Diwali With Girl Whose Video in Distress Over Arrest of Father Went Viral

A video of a minor girl in distress after his father was arrested by police in Bulandshahr has gone viral on social media. 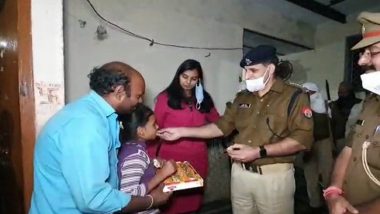 Bulandshahr, November 14: A video of a minor girl in distress after his father was arrested by police in Bulandshahr has gone viral on social media. The girl's father was arrested for allegedly selling firecrackers despite a ban. The police and district administration on Saturday celebrated Diwali with the girl and his father so that the child doesn't develop bad feelings against cops. Happy Diwali 2020 Wishes: PM Narendra Modi, Congress, Other Leaders Greet People on Deepavali.

According to reports, police arrested a firecracker seller in Khurja. While the accused was being taken to a police vehicle, his daughter got distraught and started hitting her head on the door of the vehicle. The video of the incident was widely circulated on social media. The clip did not go well Uttar Pradesh Chief Minister Yogi Adityanath who reportedly ordered the release of the firecracker seller. Later, a group of policemen and local officials visited the man's house and celebrated Diwali with his daughter.

Video of Child Crying Over Arrest of Her Father by Police:

Hello @bulandshahrpol and @Uppolice, we know that there is a complete ban on firecrackers in this area.

But take a look on how you are executing the order of @UPGovt.

A child is wailing for her father.

Is this the way to impose an order? pic.twitter.com/cdKOmA98PS

UP Police Celebrate Diwali With the Girl:

Just the video to start the day of Diwali. @CMOfficeUP took notice of Bulandshahr case. Vendor not only released but also recieved gifts from senior cops.

A very happy Diwali to all. May this day be joyous & prosperous for all. Jai Siya Ram. Jai Lakshmi Mapic.twitter.com/GACoEVhsHx

"We didn't want the child to incubate and harbour feelings of resentment towards police. So, we thought of this humanitarian gesture. We also want to send the message that Diwali can be celebrated with one's family instead of just bursting crackers," Sub-Divisional Magistrate told news agency ANI.

(The above story first appeared on LatestLY on Nov 14, 2020 11:21 AM IST. For more news and updates on politics, world, sports, entertainment and lifestyle, log on to our website latestly.com).