During the second wave of the Covid-19 pandemic when the people were struggling to get a bed in a government hospital, the opposition had accused Arvind Kejriwal's Government of investing more on advertisements, instead of enhancing Delhi's health facilities. 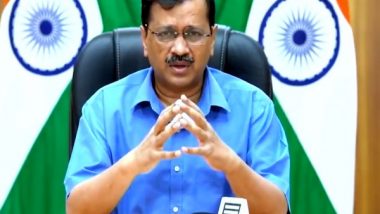 New Delhi, June 4: With the second wave of the Covid-19 pandemic receding in Delhi after daily cases declined to below 500, the Delhi government is using the respite to prepare for a possible third wave. It swung into action to augment the number of beds in government hospitals.

To avoid the situation that the people of the national capital faced in the second wave of Covid-19, the government has started working on revamping several existing hospitals to increase the number of beds and also building new hospitals.

In preparation, remodelling of the Delhi government's Aruna Asaf Ali hospital located in Civil Lines area has been initiated, which will enhance the number of beds. Apart from this, the capacity of a few other Delhi government hospitals such as Acharya Shree Bhikshu hospital, Shri Dada Dev Matri Avum Shishu Chikitsalaya and Guru Gobind Singh hospital is being enhanced. With remodelling these three hospitals together will have 1,372 beds. Delhi Reports 523 New COVID-19 Cases, 50 Deaths and 1,161 Recoveries in Past 24 Hours.

Lok Nayak Jai Prakash (LNJP) hospital, one of the largest hospitals functioning under the Delhi government, will have a separate new building for mother and child care, said Delhi Health Minister Satyendar Jain on Friday.

"LNJP hospital has been at the forefront of the fight against Covid. A new building for mother and child care is being erected," Jain added.

Apart from all these, Delhi's AAP government has also started construction of two new hospitals at Madipur and Jwalapuri. These two hospitals will be completed by next year.

During the second wave of the Covid-19 pandemic when the people were struggling to get a bed in a government hospital, the opposition had accused Arvind Kejriwal's Government of investing more on advertisements, instead of enhancing Delhi's health facilities.

A senior official in the Delhi government, talking to IANS said, "The current developments are an effort of the Delhi Government to strengthen Delhi's healthcare infrastructure with state-of-the-art facilities so that it could serve the people of Delhi not just in the present time but for several decades."

Apart from the beds, the Kejriwal government has also geared up to improve the overall healthcare system of the national capital in view of a third possible wave of the Covid-19 pandemic. On May 27 it formed two committees, an expert committee consisting of eight senior bureaucrats, and the second, a 13- member 'task force' including doctors, experts and government officials to look into the whole issue, including children's safety. COVID-19 Variant B.1.617.2 Drove Coronavirus Surge in India in April and May 2021: INSACOG.

Chief Minister Arvind Kejriwal on Friday held the very first meeting to review the preparation of these two committees, however, the meeting's details were awaited.

Sources in the Delhi government told IANS that the Kejriwal government is currently considering four scenarios for a possible third wave of Covid-19 in the city. Alarmingly, in one of the scenarios, the daily new cases could be over 45,000.

In the first scenario, the daily new cases could be as high as 28,395 which is the same as the second wave. In the second scenario, it could be 36,914, which is 30 percent more than the second wave. According to the third estimate, the number shoots up to 45,432, which is 60 per cent or more. The fourth projection indicates a bit of respite with daily cases expected to be around 15,000.

(The above story first appeared on LatestLY on Jun 04, 2021 09:08 PM IST. For more news and updates on politics, world, sports, entertainment and lifestyle, log on to our website latestly.com).