The B.1.1.7 variant of the coronavirus has been named 'Alpha'. 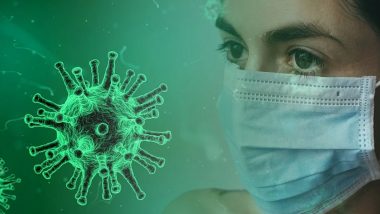 New Delhi, June 4: The surge of COVID-19 cases in the country in the last two months shows a correlation with the rise in B.1.617 variant of the SARS-CoV-2, according to INSACOG, a grouping of 10 national laboratories. April and May witnessed a deadly second wave of coronavirus cases that swept through the country stretching the healthcare infrastructure to its limits.

According to INSACOG, the B.1.1.7 lineage of the virus, which was first identified in the United Kingdom is declining in proportion across India in the last one and half month. The B.1.1.7 variant of the coronavirus has been named 'Alpha'.

The B.1.617 lineage of SARS CoV-2 was first reported from Maharashtra but it is now seen in other states such as West Bengal, Andhra Pradesh, Delhi, Gujarat, Telangana. UK Regulator Approves Pfizer-BioNTech COVID-19 Vaccine for Children Aged 12-15 Years.

"The current surge in cases seen over the last two months in some states shows a correlation with the rise in the B.1.617 lineage of SARS CoV-2," the Indian SARS-CoV-2 Consortium on Genomics (INSACOG) said.

B.1.617, initially termed as double mutant, has three new spike protein mutations. Two mutations -- E484Q and L452R -- are in the area important for antibody-based neutralisation. The third mutation -- P681R in B.1.617 -- along with the reversion of E484Q allows its sub-lineage to be more infectious.

The World Health Organisation (WHO) has termed it as 'Variant of Concern'.

In the case of B.1.617.3, it has nine to 10 spike mutations and two receptor binding domain mutations --- L452R and T478K. In the case of all the three sub-lineage, it has the potential to reduced antibody efficacy and potential reduced neutralisation by vaccine sera, which, however, remains to be established. Delhi Government To Grant Rs Five Lakh to Family Members of Those Who Died of Oxygen Shortage, Says Deputy Chief Minister Manish Sisodia.

The Indian SARS-CoV-2 Consortium on Genomics (INSACOG) is a grouping of 10 National Laboratories that was established by the Ministry of Health and Family Welfare on December 25 last year.

It has been carrying out genomic sequencing and analysis of COVID-19 viruses and correlating epidemiological trends with genomic variants. Genomic variants of various viruses are a natural phenomenon and are found in almost all countries.