The Gujarat Police have provided security to a BJP leader in Vadodara's Padra after he received death threats on social media for a comment regarding Kanhaiya Lal' murder. 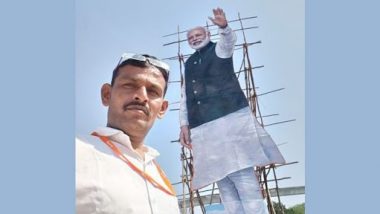 Vadodara, July 3: The Gujarat Police have provided security to a BJP leader in Vadodara's Padra after he received death threats on social media for a comment regarding Kanhaiya Lal' murder.

Nileshsinh Jadav, vice president of the BJP Padra Taluka Committee, in a complaint with the Vadu police station has stated, "One person with the ID of Abdul Subur Chaudhary has threatened that I will meet the same fate as that of Kanhaiya Lal of Rajasthan." Udaipur Kanhaiya Lal Murder: Tailor’s Killers Ran on Bike With 26–11 Mumbai Terror Attack Date As Number Plate.

He has further said this threat was in reply to his comment on Rajasthan's Superintendent of police Saurav Kumar Khichar's Facebook page, where he had commented, "There murderers were well aware that for this offence they will go to jail, even may get life term, it is possible to commit this offence... accused family may have received crores of rupees financial aid or help, this all money must be from Saudi, Qatar, Kuwait... So NIA should arrest their family members, Maulvi, so that funds can't be used, and their entire property should be seized, these people don't commit such crimes for religion but it is for money, if any journalist or political leader is supporting them, arrest them too."

In reply to this comment, Abdul Subur Chaudhary used foul and abusive language and threatened him that "he too will meet the same fate. Jadav registered a complaint on June 30 and police provided him security on Saturday.

(The above story first appeared on LatestLY on Jul 03, 2022 02:24 PM IST. For more news and updates on politics, world, sports, entertainment and lifestyle, log on to our website latestly.com).