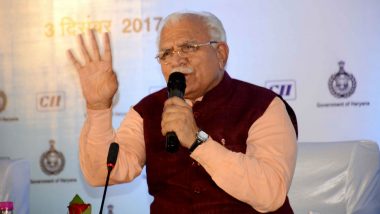 Gurugram, July 20: Haryana Chief Minister Manohar Lal Khattar on Tuesday announced financial assistance for the victims of the building collapse in Gurugram's Khawaspur area. According to a statement released by the district spokesperson, Rs two lakh will be given to the families of labourers who lost their lives and Rs one lakh to those critically injured due to the collapse of a three-storey building on Sunday night.

However, after a 19-hour long rescue operation which got over on Monday afternoon, the rescue teams, including the police, the Fire department, National Disaster Response Force (NDRF), the Health department and the Civil Defence personnel, had pulled out a man alive and three bodies. Gurugram: Three-Storey Building Collapse in Khawaspur Area, Rescue Operation Underway.

An FIR was filed against the building owner and the manager of the company where the victims used to work, under relevant sections of the Indian Penal Code (IPC) at Farrukhnagar police station on Monday.

(The above story first appeared on LatestLY on Jul 20, 2021 02:57 PM IST. For more news and updates on politics, world, sports, entertainment and lifestyle, log on to our website latestly.com).