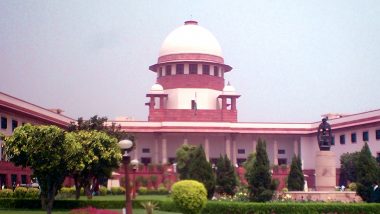 New Delhi, May 17 (IANS) Ahead of the Supreme Court hearing on the Gyanvapi row on Tuesday, all eyes are on the court as to what decision it will take.

The Supreme Court will hear an appeal against the Allahabad High Court order which dismissed a petition challenging a Varanasi court's order to appoint an advocate as a court commissioner to inspect the Gyanvapi mosque complex. Gyanvapi Masjid Survey: 'It Is a Fountain, Not Shivling', Says AIMIM Chief Asaduddin Owaisi.

After the claim from the Hindu side that it has discovered a 'Shivling', which the Muslim side has countered by saying that it is a fountain head. But, the political debate has started with the BJP leaders at an overdrive. The petitioner's lawyer has said that it is a legal battle and will be taken legally while alleging that the other side wants to "sensationalise the issue which is incorrect as the matter is in courts".

Fuzail Ahmed Ayyubi, who is a lawyer for the petitioner in the plea against the UP court order, said,"I don't want to comment on it as the matter is now in the court."

While AIMIM's Asadudin Owaisi termed it a repeat of 1949, senior Congress leader Salman Khurshid said the 1991 Law should be respected. Owaisi has slammed the court order that directed to seal the place where the 'Shivling' was discovered during the survey.

"This is a textbook repeat of December 1949 in Babri Masjid. This order itself changes the religious nature of the Masjid. This is a violation of 1991 Act. This was my apprehension and it has come true. Gyanvapi Masjid was, and will remain a Masjid till judgement day, Inshallah,," Owaisi tweeted.

It was alleged that in 1949, idols were kept inside the disputed Babri Mosque. However, the court in its judgement gave the land to the Ram temple, and the construction is in full swing.

On Monday, the Hindu side advocates claimed that a 'Shivling' had been found inside the well. Lawyer Vishnu Jain said he would go to the civil court to seek its protection.

An advocate from the Hindu side, Madan Mohan Yadav, claimed that the 'Shivling' is Nandi faced.

Heavy security was deployed as the court-appointed committee reached the spot to conduct the survey on Monday.

Nearly 65 per cent of the exercise was completed on Sunday. Another report would be submitted to the court on Tuesday.

Former Home Minister and senior Congress leader P. Chidambaram on Saturday said that status quo on all places of worship should be maintained else it would lead to a conflict.

"Places of Worship Act was passed by the Narasimha Rao government with the lone exception of Ram Janmabhoomi. All other places should have th status quo as any kind of change could lead to a huge conflict," he had said.

(The above story first appeared on LatestLY on May 17, 2022 10:15 AM IST. For more news and updates on politics, world, sports, entertainment and lifestyle, log on to our website latestly.com).