The situation around Hawaii's erupting Kilauea Volcano continued to worsen over the weekend as geologists predict that erupting lava streams could now reach a height of up to 180 meters i.e. 450 feet. 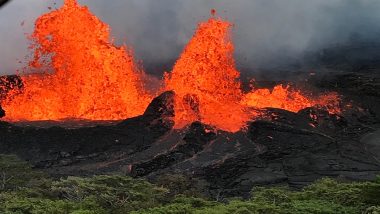 The situation around Hawaii's erupting Kilauea Volcano continued to worsen over the weekend as geologists predict that erupting lava streams could now reach a height of up to 180 meters i.e. 450 feet.

Erupting fissures in the volcano's eastern rift zone have destroyed dozens of structures including homes, forced evacuations of nearly 2,000 residents and sent molten rock into the sea where it forms a lava haze or "laze" that sends hydrochloric acid and steam filled with fine glass particles into the air.

The lava flow actually consists of two main flows that combined into a large front of lava encompassing about three-quarters of a mile where it enters the ocean, according to eyewitnesses who took a boat out to survey the scene.

Experts warn the laze cloud could travel 15 miles, another worry for emergency officials along with flying "lava bombs" that can weigh as much as refrigerators. One hit a man over the weekend, shattering his shin. Experts say the speed of eruptions and flow of lava has increased with the lava spreading the length of two to four football fields an hour.

Lava follows the path of steepest descent to the ocean. Here is the May 21 fissure and flow map. https://t.co/vBjYPHG5Wd pic.twitter.com/mj2YLzzc6C

Over the last month, the Big Island has recorded 3,000 volcano-related earthquakes. Residents say they have been experiencing over 100 tremors on a daily basis with the strongest earthquake recording 6.9 on the Richter scale.

For the geologists watching the eruption, one surprise was the composition of some of the lava erupting from fissure 17. The initial analyses show that it is 57 weight percent silica which makes it an andesite. The United States Geological Survey explains the lava erupting 57% silica is pretty unique for Kilauea and suggests that the basalt coming from up on the East Rift has magma which has been in the rift for as far back as 1924.

Fissure fountains feed lava flows, as shown in this overflight video of Kīlauea Volcano’s Lower East Rift Zone on May 21, 2018, ~7:20 AM. https://t.co/7J2riOm5XH pic.twitter.com/zEQWRBiq7c

The USGS reports that the rate of lava eruption has increased since Friday and that new lava flows are likely. The eruptions also give off toxic gases and local authorities have been distributing gas masks to local residents. USGS scientists says there's no way to tell how long the eruptive activity could continue.

(The above story first appeared on LatestLY on May 22, 2018 11:27 AM IST. For more news and updates on politics, world, sports, entertainment and lifestyle, log on to our website latestly.com).