He Came, He Saw, He Conquered! Remembering Gurtej Singh: The Valiant Soldier of Galwan 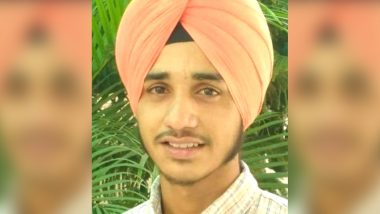 Abhi Umar kul teis ki thi….. Like iconic Rani Jhansi, he was only 23 when he embraced martyrdom, defending the frontiers of his nation from the caitiff encroachment by the adversary.

He is Gurtej Singh of 3rd Punjab's Ghatak Platoon who killed 12 of the Chinese troopers before making the supreme sacrifice for the nation. He is there. Because martyrs don't vanish, they get imbibed in the hearts and memories of their grateful aficionados. Indian Army Chief General Manoj Mukund Naravane Meets Soldiers Injured in Galwan Valley Clash During His Ladakh Visit.

The 3 Punjab's Ghatak Platoon was called upon to reinforce the outnumbered Bihar regiment fighters at Galwan valley on the eve of June 15. When they rushed to counter the Chinese affront, Gurtej Singh was only carrying his customary Kirpan and an assortment of sticks, rods, and knives.

Recalling the valor of Gurtej Singh his fellow fighters say he was attacked by four Chinese soldiers to which the young soldier roaring 'Bole So Nihal, Sat Sri Akal' charged at them.

He swung around two of them, and as two others tried to pin him down, he dragged all four of them towards the cliff and flung them over. He lost his balance though and slipped. But he got stuck in a boulder that stopped his free fall.

Though he was injured severely in the neck and head, he rewrapped his turban and pulled himself back to the fight. He pulled out his kirpan to fight more soldiers until he could snatch a sharp weapon from a Chinese soldier. With lightning agility, he further took down seven Chinese soldiers making the tally to 11 before one stabbed him from behind. But before going down, he killed his final 12th enemy with his kirpan too.

He had joined the Army in December 2018. He originally belongs to Beerewala village in Punjab's Mansa district. He also wanted to serve the army and his dream came true when he joined the Sikh regiment. Indian Army Chief General Manoj Mukund Naravane Awards Commendation Cards to Soldiers Who Faced Chinese Soldiers in Galwan Valley Clash in Ladakh.

His final rites were conducted with full military honors on June 19 in his native village amidst the slogan chanting of 'Gurtej Singh Amar Rahe' and 'Bole So Nihal Sat Sri Akal' from the villagers who have gathered in large numbers to mourn the death of its most valiant son.

(The above story first appeared on LatestLY on Jun 28, 2020 12:49 PM IST. For more news and updates on politics, world, sports, entertainment and lifestyle, log on to our website latestly.com).