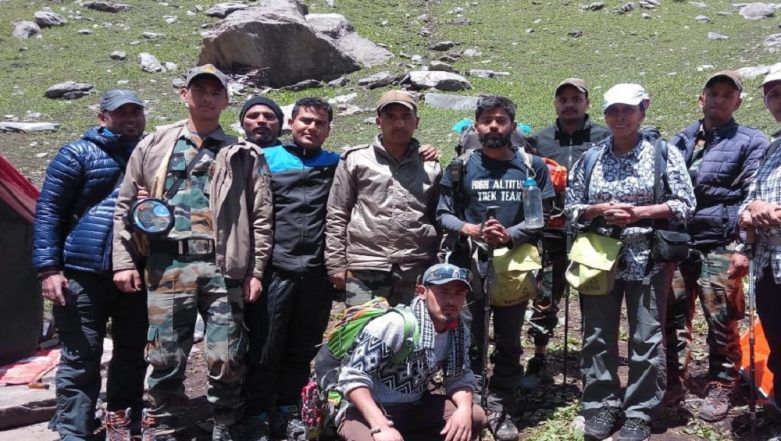 One trekker dead, 10 others recued from Himachal Pradesh by IAF (Photo Credits: ANI)

Shimla, May 25: Two injured trekkers from a seven-member team from West Bengal were airlifted to safety from the high mountains of Himachal Pradesh by the Indian Air Force on Saturday while four others were rescued on foot. One trekker Jevaasheesh Mehtu from Kolkata died on the spot. The district administration was informed that the group of seven trekkers, who were moving from Rohru in Shimla district to Brua area in Sangla valley, was stranded in Manirang area in Kinnaur district. Trekker Rupam Ghosh was in a critical condition while another was airlifted.

Deputy Commissioner Gopal Chand told IANS that a ground rescue team, comprising of police and Home Guard personnel, was deployed for the rescue operation. He said since the airlifting of the critically injured trekker was required on priority, the Indian Air Force (IAF) in Sarsawa in Uttar Pradesh was requested to carry out the rescue operation. Nepal Mountaineer Kami Rita Sherpa Climbs Mount Everest for a Record 24th Time.

Himachal Pradesh: Two teams of trekkers, one of 7 and another of 4 trekkers and one guide, went missing in Kinnaur. In the 1st group, one died, one in critical condition was airlifted & 5 were rescued by Quick Reaction Team. The second team has been located & is being rescued pic.twitter.com/KopeWlebV9

An IAF chopper landed at Kuppa helipad and rescued both the injured trekkers. The official said another group of 13 trekkers was stranded in Sangla area. Eight of them reached Sangla safely while five were rescued by the district administration's quick response team.