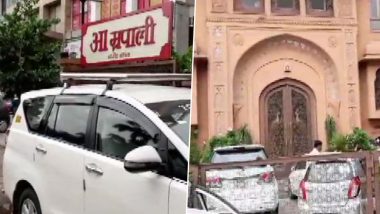 The raids were conducted at a time when CM Ashok Gehlot is facing a revolt from his deputy and Congress leader Sachin Pilot. The Congress government in Rajasthan is staring at what has happened in Madhya Pradesh when Jyotiraditya Scindia left along with over 20 MLAs. Pilot on Sunday openly announced that he has the support of 30 MLAs and the Ashok Gehlot government in Rajasthan has lost majority. Jyotiraditya Scindia Reacts to Rajasthan Congress Crisis, Says 'Sad to See Sachin Pilot Being Sidelined'.

IT Raids at Rajiv Arora And Dharmender Rathore's Properties:

#UPDATE Rajasthan: Income Tax Department conducting raids at multiple locations across the state, including office and residence of Congress leader Dharmendra Rathore and one Rajiv Arora, a member of State Congress Office.

In an official statement, Pilot said, "Chief Minister Ashok Gehlot government is in minority after over 30 Congress and some independent MLAs have pledged support to me." Congress, however, has claimed that 109 MLAs are supporting the Gehlot government. The Congress Legislative Party has issued a whip to its MLAs to attend a meeting on today in Jaipur. It has warned of disciplinary action if they absent themselves without mentioning a reason.

(The above story first appeared on LatestLY on Jul 13, 2020 11:06 AM IST. For more news and updates on politics, world, sports, entertainment and lifestyle, log on to our website latestly.com).