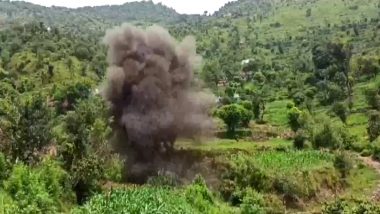 Srinagar, July 28: Security forces on Tuesday detected two live bombs, reportedly placed by Pakistani terrorists, along the Line of Control (LoC) in Jammu and Kashmir's Poonch district. The bombs were recovered in a residential area in Karmarha. Subsequently, the bomb disposal squad of the Indian Army reached the spot and destroyed the bombs in a controlled explosion. A video of the controlled explosion also surfaced on social media. India Summons Top Pakistani Envoy Over Ceasefire Violation in Jammu & Kashmir That Killed 3 Civilians.

In the video, the controlled explosion can be seen followed by skies of smoke billowing from the area. Earlier today, Pakistan violated ceasefire along the LoC in Degwar and Qasba sectors of Poonch district. "At about 10 am today, Pakistan initiated unprovoked ceasefire violation by firing with small arms and shelling with mortars," Defence Ministry Spokesperson Colonel Devender Anand told news agency IANS.

The Indian Army retaliated strongly to the ceasefire violations. Pakistan has been violating ceasefire with impunity on the LoC in Jammu and Kashmir ever since the beginning of this year. There have been 2,711 incidents of ceasefire violation so far in which 21 civilians have been killed and 94 injured.

(The above story first appeared on LatestLY on Jul 28, 2020 04:29 PM IST. For more news and updates on politics, world, sports, entertainment and lifestyle, log on to our website latestly.com).