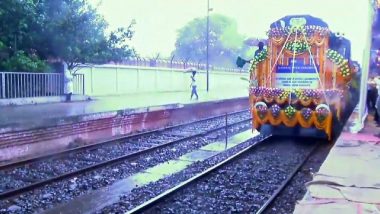 New Delhi, July 27: India on Monday handed over 10 railway locomotives to Bangladesh, reflecting its continued efforts to further boost bilateral economic engagement and expand ties with the neighbouring countries notwithstanding the coronavirus pandemic.

The broad gauge locomotives were virtually flagged off to Bangladesh by External Affairs Minister S Jaishankar and Railway Minister Piyush Goyal. From the Bangladesh side, the online ceremony was attended by Minister of Railway Md. Nurul Islam Sujan and Minister of Foreign Affairs Abul Kalam Abdul Momen. Indian Railways to Run on 100% Electricity by 2024, Says Piyush Goyal.

Speaking on the occasion, Jaishankar highlighted the depth of "time tested" relationship between India and Bangladesh based on mutual trust and respect. He expressed his happiness that the COVID-19 pandemic has not slowed down the pace of bilateral cooperation and conveyed that he looked forward to more such "milestones" in the current year marking the birth centenary of Bangabandhu Sheikh Mujibur Rahman.

In his comments, Goyal underscored the significance of railway cooperation in enhancing bilateral trade and connectivity and in further boosting the economic partnership between the two countries. "The handing over of these locomotives, under grant assistance from the government of India, fulfils an important commitment made during the visit of Prime Minister of Bangladesh Sheikh Hasina to India in October, 2019," the Ministry of External Affairs said in a statement.

"In keeping with the requirements of Bangladesh Railway, the locomotives have been suitably modified by the Indian side. These locomotives will help handle the increasing volume of passenger and freight train operations in Bangladesh," it said.

Officials said all locos have residual life of 28 years or more and they are designed for speed of up to 120 km per hour. In the recent times, the MEA said, India and Bangladesh have stepped up cooperation between their railways in mitigating the impact of the COVID 19 pandemic as trade via land border faced disruptions.

"Recently, parcel and container train services have also commenced between India and Bangladesh. This is expected to significantly enhance the scope of bilateral trade," it said.

As part of its assistance to neighbouring countries, India on Saturday extended a USD 400 million currency swap facility to Sri Lanka to boost the island nation's foreign exchange reserves which are depleting during the coronavirus pandemic.