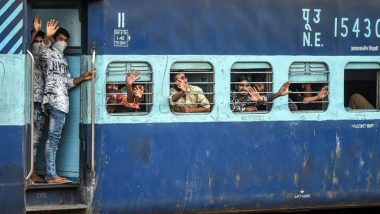 Vinod Kumar added that the Indian Railways will monitor special trains and wherever there is a demand for a train or the waiting list is long, it will run a clone train. As for running trains for candidates appearing in various exams across the country, he said: "We will run trains whenever there is a request from the state governments for exams and other such purposes." Private Trains in India? 23 Companies Attend Meeting Called by Indian Railways.

Full List of 80 Passenger Trains Set to Start From September 12:

VERY IMPORTANT ANNOUNCEMENT: Complete list of 80 trains as announced by Ministry of Railways. These trains will start from 12th. pic.twitter.com/MbVq3OfJuR

The Indian Railways had suspended the passenger, mail and express trains from March 25 in view of the nationwide lockdown imposed to contain the spread of coronavirus (COVID-19). The Railways started to operate the Shramik Special trains from May 1 for stranded migrant workers, students, pilgrims and tourists. It also began 15 pairs of Special Air Conditioned trains from May 12 and 100 pairs of timetabled trains from June 1.

(The above story first appeared on LatestLY on Sep 05, 2020 06:28 PM IST. For more news and updates on politics, world, sports, entertainment and lifestyle, log on to our website latestly.com).