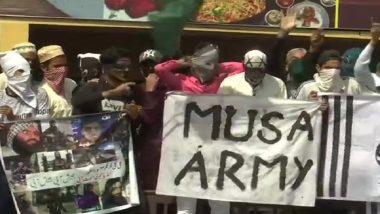 As per reports, clashes erupted between protesters and the security forces after Eid prayers. Forces used teargas shells to disperse the protesters. No one was reported injured in the clashes. Similar protests were also reported in other parts of the Kashmir Valley including Baramulla district.

Visuals of protests after Eid Prayers in Srinagar:

Last month, Musa was killed in an encounter in Tral area of Jammu and Kashmir’s Pulwama. According to reports, the gunbattle broke out between terrorists and security forces at Dadsara village in the Tral area. In retaliation, security forces gunned down Musa. Recently, Azhar was also designated as an international terrorist by the UN.

(The above story first appeared on LatestLY on Jun 05, 2019 02:29 PM IST. For more news and updates on politics, world, sports, entertainment and lifestyle, log on to our website latestly.com).