Jammu and Kashmir Official Languages Bill, 2020: Here's All About the Bill Passed in Rajya Sabha Today 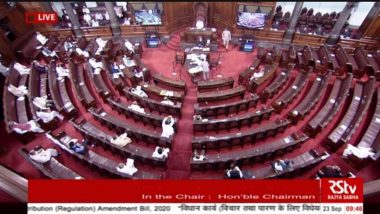 Here's All About the Bill:

The bill recognises Kashmiri, Dogri and Hindi, apart from the existing Urdu and English, as the official languages in the Union Territory of Jammu and Kashmir. Sikh and Gujjar communities have protested the exclusion of Punjabi and Gojri languages from the bill.

In Rajya Sabha today, Shiromani Akali Dal MP Naresh Gujral said, "Unfortunate that Punjabi isn't being included in this Bill, as an official language in J&K. Punjabi is the richest & oldest language of north India, with its own script Gurmukhi."

(The above story first appeared on LatestLY on Sep 23, 2020 02:07 PM IST. For more news and updates on politics, world, sports, entertainment and lifestyle, log on to our website latestly.com).