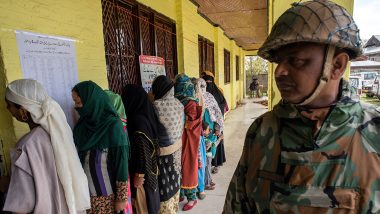 New Delhi, February 17: Election Commissioner Sushil Chandra on Monday was nominated as the member of the Jammu and Kashmir Delimitation Commission. The three-member panel was proposed by the Centre to draw out Assembly constituencies for the newly-formed union territory of J&K. As per reports, the Commission will be headed by a former Supreme Court judge. The third member will reportedly be from Jammu and Kashmir administration. Jammu and Kashmir Panchayat Elections 2020 to Be Held in March Using Ballot Boxes.

Last year, Parliament passed the Jammu and Kashmir Reorganisation Act, 2019 on August 6, a day after the abrogation of Article 370 from Jammu and Kashmir. According to one of the provisions of the legislation, the number of seats in the Legislative Assembly of J&K shall be increased from 107 to 114. In November 2018, erstwhile J&K state's legislative assembly was dissolved. Jammu & Kashmir's Ex-CMs Omar Abdullah and Mehbooba Mufti Booked Under PSA: Reports.

The commission has been constituted at a time when speculations were rife that the Jammu region of the UT might get a larger share in the assembly. Last year, the Bharatiya Janata Party (BJP) president JP Nadda had said that the elections in Jammu and Kashmir would be held only after the delimitation of seats.

Meanwhile, polls for for around 13,000 panchayat seats in Jammu and Kashmir union territory will be held in March. These will be the first major elections after the abrogation of Article 370. Though in October last year, block development elections also took place, the magnitude of electorate covered in the polls minuscule compared to the panchayat elections. Jammu And Kashmir BDC Elections 2019: PM Narendra Modi Tweets in Four Languages, Including Urdu And Ladakhi, to Hail Historic 98% Turnout in Polls.

On August 5, 2019, the Narendra Modi government scrapped special status of Jammu and Kashmir by diluting Article 370 of the Indian constitution. The state was also divided into two UTs – J&K and Ladakh. After the abrogation of Article 370, all the prominent political leaders were put under house arrest.

(The above story first appeared on LatestLY on Feb 17, 2020 10:41 PM IST. For more news and updates on politics, world, sports, entertainment and lifestyle, log on to our website latestly.com).