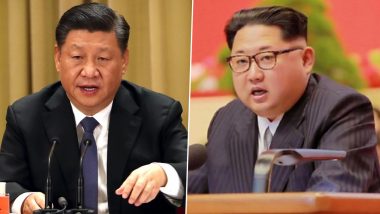 Kolkata, June 18: Workers of the West Bengal unit of Bharatiya Janata Party (BJP) came out on the streets to mark their angst against China following a violent face-off at the border which killed 20 Indian soldiers. A video came to the fore on Thursday which showed the BJP workers in Asansol burning an effigy to mark their angst. Boycott Chinese Goods Protests: People Destroy Their Made-in-China TV Sets, Watch Videos.

What went wrong with their act of dissent was that the effigy they burnt was not of China's President Xi Jinping but North Korean Supreme Leader Kim Jong Un. The latter is not related to the Sino-Indian row and is at the focal point of a seperate geopolitical tensions in Korean Peninsula.

A BJP worker who spoke on camera said the country should boycott Chinese products to economically weaken China. "We will burn the effigy of China's Prime Minister Kim Jong as our mark of anger and protest," he said.

The statement was factually incorrect as not only is Kim Jong not the head of Chinese regime, but the post of Prime Minister does not exist in China's polity.

Tensions escalated between India and China on June 16, after it was revealed that a violent face-off a day earlier had claimed the lives of 20 Indian Army personnel. Casualties were also reportedly sustained on the Chinese side, but no official confirmation was issued.

In a statement issued to the nation on Wednesday, PM Modi said India would not hesitate to retaliate if the country's territorial integrity and sovereignty is challenged. "The country will be proud of the fact that our soldiers have died fighting," he said, hailing the martyrdom of the jawans who lost their lives in Galwan Valley face-off.

(The above story first appeared on LatestLY on Jun 18, 2020 08:34 PM IST. For more news and updates on politics, world, sports, entertainment and lifestyle, log on to our website latestly.com).