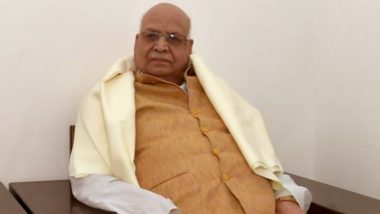 Lucknow, June 25: The condition of Madhya Pradesh Governor Lalji Tandon, who has been hospitalised at Lucknow's Medanta Hospital, is continuously improving, said the latest health bulletin on Thursday. "He is feeling better to breathe by lungs. His ventilator support is gradually being removed," the Medanta Hospital said, adding that a team of medical experts is working for medical treatment.

Tandon, 85, is on ventilator after suffering from fever and complications related to a urinary tract infection. He was admitted to Medanta Hospital on June 11. Tandon underwent emergency surgery on June 15 for internal bleeding in his stomach. On June 16, Madhya Pradesh Chief Minister Shivraj Singh Chouhan, UP law minister Brijesh Pathak went to meet the ailing leader. Shia cleric Maulana Kalbe Jawwad also visited the MP Governor.

There is continuous improvement in condition of Governor of Madhya Pradesh, Lal Ji Tandon. His ventilator support is gradually being removed: Medanta Hospital, Lucknow, UP pic.twitter.com/SINbRPDkrG

The hospital has allowed a relative wearing a protection kit to sit in the hospital room where Lalji Tandon is admitted. "At this time, he needs moral support. A television has been installed in his room. He is conscious. He cannot speak as a tube has been put on him. But he will recognise you. He will raise his hand, smile slowly. He is responding,” Medanta Hospital Director Rakesh Kapoor had told PTI.

(The above story first appeared on LatestLY on Jun 25, 2020 07:03 PM IST. For more news and updates on politics, world, sports, entertainment and lifestyle, log on to our website latestly.com).