LIC IPO To Launch on May 4: Price Band, Important Dates; All You Need To Know About LIC IPO

According to government sources, the LIC IPO will open on May 2 for policyholders and employees, and from May 4 to May 9 for the general public. 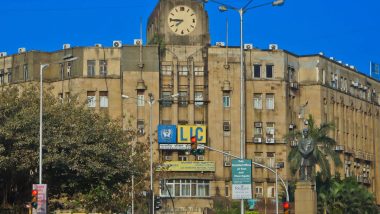 Mumbai, April 27: The much-awaited initial public offering (IPO) of the Life Insurance Corporation (LIC) is all set to open on May 4. According to news agency ANI, the price band of the IPO of India's largest insurance company has been set at Rs 902-Rs 949 per share. A discount of Rs 45 has been set for retail and employees, while the bid lot size has been fixed at 15 shares per lot.

The LIC IPO which will open on May 4 was supposed to get listed during the last financial year before March 31. However, the listing was postponed due to the unstable market conditions that emerged after the Russia-Ukraine war. LIC IPO Price Band Fixed For Rs 902-949 Per Share, Policy Holders to Get Discount.

According to government sources, the LIC IPO will open on May 2 for policyholders and employees, and from May 4 to May 9 for the general public. Last month, the Securities and Exchange Board of India (SEBI) approved the LIC IPO.

Following this, the LIC filed a Draft Red Herring Prospectus - an offer document that is filed by a company that wants to raise money from the public by selling its shares to investors.

LIC IPO to open on May 4, sets price band at Rs 902 to Rs 949 per equity share. We will call it LIC 3.0 phase: Tuhin Kant Pande, Dipam, Secretary for Department of Investment and Public Asset Management pic.twitter.com/awoVzGJyQ1

It must be noted that LIC is still the biggest IPO in the history of the stock market but its issue size is close to that of Paytm, which is the second-largest issue ever.

Here's all you should know about the LIC IPO:

(The above story first appeared on LatestLY on Apr 27, 2022 01:55 PM IST. For more news and updates on politics, world, sports, entertainment and lifestyle, log on to our website latestly.com).