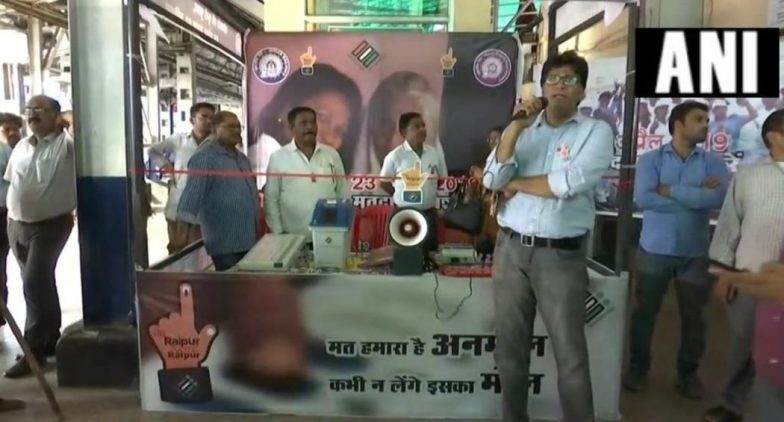 Raipur, April 6: With just a few days left for Lok Sabha Elections 2019, various campaign and programmes have been launched to raise awareness about voting. In a similar development from Chhattisgarh, mock polling booths with Electronic Voting Machine (EVM) and Voter Verifiable Paper Audit Trail (VVPAT) are installed at Raipur Station. What Is EVM and How Does It Work? All FAQs Answered on Electronic Voting Machine Ahead of Lok Sabha Elections 2019.

The railway staff and people in the station were given information about the EVM, as well as the method of using VVPAT machines to verify the vote after voting. It is notable that VVPAT is being used for the first time for Lok Sabha elections. Earlier, it was successfully used in the assembly elections. VVPAT Full Form And Functions: All FAQs Answered on VVPAT Machines.

This move is to raise the importance of voting and to solve people's doubts about EVM and VVPAT. This progress from the government officials is to inspire people for voting. PIB, MyGovIndia Uses Funny Memes From Gangs of Wasseypur 2, Mr India & Harry Potter for Voter Awareness Before Lok Sabha Elections 2019.

The Lok Sabha Elections in Chhattisgarh will take place in the first, second and third phase of General Elections from April 11, 2019, to April 23, 2019. Voting in the state will be held on April 11, 18, and 23. The Counting of votes will take place on May 23.