A nearly four-feet-long monitor lizard was rescued by the Wildlife SOS Rapid Response Unit from an engine bearing and piston manufacturing factory, Benara Udyog Limited, in Agra's Artoni on Thursday. 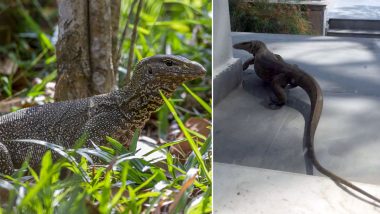 Agra, October 21: A nearly four-feet-long monitor lizard was rescued by the Wildlife SOS Rapid Response Unit from an engine bearing and piston manufacturing factory, Benara Udyog Limited, in Agra's Artoni on Thursday. The reptile was kept under observation for a few hours and later released back into the wild.

When the staff of Benara Udyog stumbled upon the monitor lizard in the front lawn of the factory, the security staff immediately alerted the Wildlife SOS's 24-hour emergency service and a two-member team was dispatched to the location. Monitor Lizard Spotted Strolling During Cyclone Yaas, Video Claiming to be from Bangur Avenue in Kolkata Goes Viral.

The monitor lizard was then carefully transferred into a safe container by the team. It was later released back into its natural habitat.

Co-Founder and CEO of Wildlife SOS, Kartick Satyanarayan, said, "We are grateful to the factory employees who responded to this situation responsibly. Wildlife SOS often receives calls about monitor lizards who have wandered into various urban areas - from people's homes to classrooms. Our team is well equipped to rescue wildlife animals in distress and follows all protocols to ensure maximum safety for everyone involved."

Director Conservation Projects for Wildlife SOS, Baiju Raj M.V, said, "Due to the rains many reptiles are forced to seek shelter on higher ground. Monitor lizards are non-venomous but can bite or even use their strong claws in retaliation if threatened or provoked. Therefore, our team had to be cautious while carrying out the rescue operation as they wanted to avoid agitating the distressed reptile."

The Wildlife SOS Rapid Response Unit has previously rescued an Indian Wolf snake from a house in PP Nagar, Sikandra and a five-feet-long Indian rat snake from the storeroom of a chemical factory in Shastripuram, Agra. Both the reptiles were later released back in the forest.

(The above story first appeared on LatestLY on Oct 21, 2021 05:15 PM IST. For more news and updates on politics, world, sports, entertainment and lifestyle, log on to our website latestly.com).