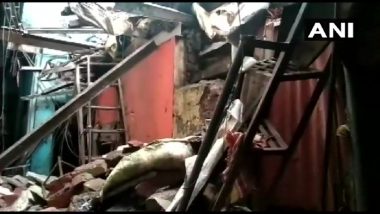 Mumbai, August 13: A building collapse was reported on Thursday evening in the densely populated Chembur locality of eastern Mumbai. Preliminary reports confirmed the death of at least one person, whereas, four others sustained serious injuries. The victims were rushed to the hospital shortly after the structure collapsed.

The building that came down in Chembur was a ground plus one structure. it was largely evacuated due to the ongoing repair and renovation work. An enquiry is likely to be conducted by the civic officials to ascertain how the building collapsed. What Does Mumbai Need? Here Are An Architecture Student's Suggestions.

Maharashtra: One dead and four injured after part of a building collapsed in Chembur area of Mumbai today. pic.twitter.com/I640sPG5uC

During the Monsoon season each year, a spree of buildings in Mumbai region is marked as dangerous by the Brihanmumbai Municipal Corporation (BMC). In some cases, dilapidated buildings are also forcefully evacuated to minimise the risk of loss of human lives.

The torrential rainfall in the city batter the infrastructure and pose a risk to the safety of residents staying in weakened, old and dilapidated buildings. In the past seven years, Mumbai has reported a total of 3,981 building crashes in Monsoon months, which had cumulatively claimed 299 lives, as per the BMC data.

(The above story first appeared on LatestLY on Aug 13, 2020 08:03 PM IST. For more news and updates on politics, world, sports, entertainment and lifestyle, log on to our website latestly.com).