A seven-year-old boy drowned in an open drain, here on Monday, making it the third incident of its kind in six days in the country's commercial capital, officials said. 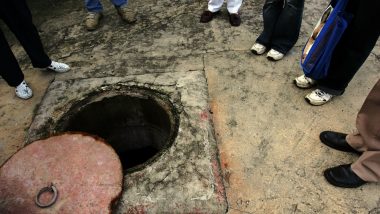 Mumbai, July 15: A seven-year-old boy drowned in an open drain, here on Monday, making it the third incident of its kind in six days in the country's commercial capital, officials said.

The victim, Sumit Jaiswal, fell into an open drain near a garden in the Rajiv Gandhi Colony in Dharavi and his body was taken out after a few hours by rescuers. Last Saturday (July 13), a 12-year-boy Bablu Paswan fell in a pit at a construction site of the coastal road project in Worli. Manhole Claims Another Life in Mumbai; 7-Year-Old Boy Dies After Falling Into Open Drain in Dharavi.

The deep pit was flooded with rainwater during the heavy weekend downpour and the victim accidentally fell into it and was killed. Earlier on July 10, a two-month-old toddler Divyanshu Singh fell in an open drain while playing on the road in Goregaon.

Though rescue agencies launched a massive search for him with sophisticated gadgets in a 10 km vicinity right up to the Arabian Sea, his body is yet to be recovered.

The BrihanMumbai Municipal Corporation (BMC), which has come under severe flak for these incidents, has officially maintained that some miscreants remove manhole covers during heavy rain which lead to such accidents.

Last week, the BMC revealed in an RTI reply to activist Shakeel Ahmed Sheikh that a staggering 328 Mumbaikars, including men, women and children, lost their lives by drowning in flooded drains, open manholes or in the Arabian Sea in the past five years.

The issue shot into prominence after leading gastroenterologist (Dr) Deepak Amarapurkar of Bombay Hospital drowned in an open manhole in September 2017 and his body was found off the rocks near the Worli sea face after a couple of days. Sheikh and other citizens have demanded that the BMC must give compensation to all such victims for the civic body's alleged negligence.

(The above story first appeared on LatestLY on Jul 15, 2019 09:09 PM IST. For more news and updates on politics, world, sports, entertainment and lifestyle, log on to our website latestly.com).