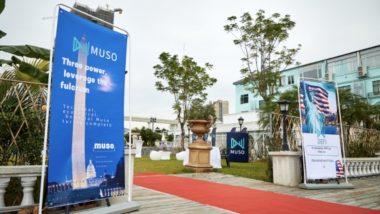 MUSO creation will soon shake the world. February 1,2021 is a very memorable day for global financial investors and blockchain believers, another milestone in the history of blockchain development, attracting the strong attention of the world's top financial experts, economists and blockchain technology experts.

MUSO the careful planning of the United States headquarters marketing center and the joint efforts of global financial practitioners, the five countries launched the meeting successfully and successfully concluded.

From February 1, block chain history will draw a strong stroke: MUSO the creation of the world, redefine block chain finance!

Five stops to shake the world

With the MUSO board resolution, the MUSO lead investment foundation authorized the launch of the project will be the first in the United States, the United Kingdom, China, Singapore, Malaysia five countries, the summit gathered the world's top financial investment and research institutions, global pilot-level economists, the world's TOP financial and block chain media.

The following is the five countries to start the event, a quick look!

As we all know, the United States is the largest financial asset in the world, with the latest total market value of US stocks totaling $31.6 trillion. America's dominant influence in important international organizations such as the International Monetary Fund (IMF) and the World Bank, the dollar has always been the international reserve currency, accounting for more than 50 percent of the world's foreign exchange reserves. MUSO global launch conference in the United States is a unique advantage.

MUSO Financial Group founder and CEO-Bill Brown attended the launch of the conference headquarters of the United States station and delivered a speech, global attention.

In 2021, the global open-source block chain project, can be called "stunning" is not many. And MUSO financial platform, can be said to be the most characteristic, the most grand vision.

Technology is the core logic to support the trillion-level market. MUSO based on technology, virtual finance is laid out in real business. It is an intelligent contract platform based on MUSO independent public chain. MUSO Group Board of Directors calls it: the decentralization of the block chain "central bank ".

Bill Brown announced the launch and opening of champagne MUSO the world on February 28,2021, celebrating with top analysts and celebrities at Wall Street institutions in the United States, leaving a very memorable moment.

MUSO launch conference was held simultaneously in London, England, London is one of the world's most important economic centers, It is also the largest economic center in Europe. Finance is London's most important economic pillar, About 325 employees, 000(2007). London, or "one square mile ", is the largest financial center in London, There are many banks, insurance companies and financial institutions. About half of Britain's top 100 companies and more than 100 European 500 companies have headquarters in London. London is Britain's political, economic, cultural, financial center and world-famous tourist destination, There are a large number of scenic spots and museums. London is a diverse metropolis, Residents from all over the world, A melting pot city of race, religion and culture, More than 300 languages, Is a model of globalization.

A document called the cryptocurrency asset guide was released in 2019 by the uk financial regulator FCA( financial market behavior watchdog). The document points out that encrypted monetary assets can be considered as "specific investments" according to "financial instruments" regulated by markets in the II of national regulatory activity orders (RAO) or financial instruments directives ".

As a result, the UK may be one of the most open countries to blockchain technology and digital money, always with a "unsupervised" attitude, and also provides a very preferential policy for global blockchain start-ups

As a full license of digital money and finance MUSO, in the UK, the starting road is bound to be unobstructed, leading the British block chain industry a new "industrial revolution ".

The core member of the MUSO Foundation EVA GREEN attended and delivered a speech at the launch conference in London, England.

As the country with the largest population, China has the largest number of blockchain audiences and venture capital institutions in the world, including: BKFUND、BLOCKVC、 octave capital, creation capital, distributed capital, acquired capital, connected capital, thousand square fund, Viking capital, Keyin capital and so on.

The Singapore Enterprise Development Bureau, the Information and Communications Media Development Bureau and the National Research Foundation subsequently issued a joint announcement that the $12 million innovation plan, supported by the Singapore Financial Administration, aims to combine blockchain technology research with industry needs and promote the practical application of blockchain in the wider development and commercialization. The plan will attract about 75 companies.

The MUSO Macedonian financial project, which has MSB financial license issued by the United States Treasury Department and the RIA financial investment license issued by the Securities and Exchange Commission (US Securities and Exchange Commission, acronym), is the key object of the Singapore government's strategic layout of the block chain industry, which meets the regulatory requirements and has innovative potential.

I believe that MUSO finance will bring Singapore a new concept of block chain finance and become the leader and pioneer of Singapore block chain industry.  MUSO core members of the Foundation John Sam attend the Singapore MUSO launch Conference and address.

On 15 January 2020, Malaysia implemented 15 new regulations on the encrypted currency industry. Encrypted currency, tokens, and encrypted assets will be classified as securities that will be governed by the Malaysian Securities Commission.Malaysia's finance minister said the new regulatory measures aimed at improving transparency in the industry to increase investor trust.

Selecting Malaysia as the venue for the MUSO launch conference, MUSO Group made full strategic research and appointed a core member of the MUSO Foundation, a former JP of a famous Wall Street financial company, to Malaysia to guide the launch summit.

MUSO hosting the "launch Conference" of the five countries is not only a solemn project launch event, but also a grand party, of the top financial giants.

America, Britain, China, Singapore, Malaysia, the five countries block chain regulators and major capital agencies, together to congratulate the MUSO of the founding of the world, in the launch of the Congress's unveiling of the celebrity party, helicopters, private yachts, wine and delicacies, luxury.

A gathering of heroes MUSO set sail for the stars

Finally, to build an aircraft carrier of encrypted finance, covering the traditional finance and block chain digital currency combined investment of the financial alligator group- MUSO group, the business model is a holding and investment in one of the diversified groups, Encrypted money market and traditional financial market balance holding.

Since 2021, the MUSO strategic goal is to invest in more than 150 blockchain companies in more than 30 countries around the world, laying out all blockchain infrastructure businesses, including well-known projects such as Coindesk、Coinbase、Blockstream、Zcash、Circle、BitGo, into the portfolio. The largest encrypted money investment fund NGC Ventures、Coinbase Ventures、Digital Currency Group、Grayscale and large digital money agency market makers Genesis into the MUSO Group.

The rising capital game, the strange tuyere trend, the new concept, the civilization brilliance of the ecological era. MUSO Macedonian Finance was born on February 28, it will outline another era of great upheaval. Let us look forward to the next block chain wealth tuyere MUSO myth!