NEET-PG 2021 Counselling: Agitating Delhi Doctors to Continue Protest Till FIRs are Withdrawn Against Them

The resident doctors on Wednesday continued their protest in support of their demands, including the withdrawal of the FIRs filed against them. 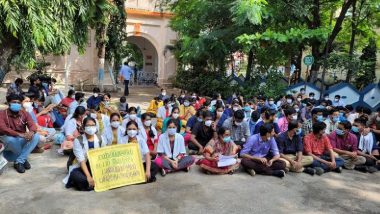 New Delhi, Dec 29: The resident doctors on Wednesday continued their protest in support of their demands, including the withdrawal of the FIRs filed against them.

The meeting between a delegation of the protesting doctors and the Union Health Minister on Tuesday had failed to make any headway.

The resident doctors have been protesting for the past 13 days over the delay in NEET-PG 2021 counselling.

In a statement, the Federation of Resident Doctors Association of India (FORDA), which is leading the protest nationwide, said that the FIR has been filed by the police against the protesting resident doctors. "After discussion with the RDA representatives, it has been decided to continue the agitation till our demands are met," said the doctors' association. NEET-PG Counselling Protest: Arvind Kejriwal Condemns Alleged Police Brutality on Protesting Doctors in Letter to PM Narendra Modi.

A source in the RDA meeting said that all RDAs agreed to call off the strike as the Union Health Minister assured the meeting that the report will be submitted in the court on the next hearing on January 6 and he was hopeful that soon the counselling dates will be announced. But, some of RDA representatives were determined to stretch the protest till the FIRs are withdrawn by the Delhi Police and an apology submitted for their action during Monday's protest. "However, we all agreed to continue the protest till all our demands are met," he added.

As the protest, including the withdrawal of all medical and emergency services, entered into 13th day, the patient care has largely been affected across the hospitals in Delhi.

City's Safdarjung Hospital, which has emerged as the main centre of protest, is running with only senior doctors in the OPD and Emergency services. Amid heavy security personnel deployed in the hospital, junior doctors are boycotting the services. However, doctors are planning to take the protest forward with Covid norms as Delhi has been placed under yellow alert after the Covid spike.

(The above story first appeared on LatestLY on Dec 29, 2021 02:27 PM IST. For more news and updates on politics, world, sports, entertainment and lifestyle, log on to our website latestly.com).