India on Thursday issued a notification banning the export of onion seeds to foreign countries. 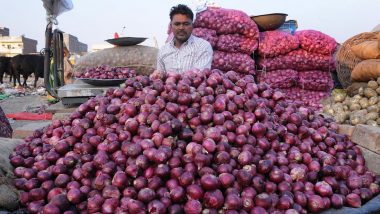 New Delhi, October 29: India on Thursday issued a notification banning the export of onion seeds to foreign countries. "The export of onion seeds is prohibited with immediate effects," said the notification issued by the Directorate General of Foreign Trade (DGFT). The DGFT, an arm of the Ministry of Commerce and Industry, deals with exports and imports-related issues. Onion Export Ban: Farmers in Nashik Unhappy Over Centre's Decision, Fear Decline in Wholesale Prices of Bulb.

Last month, the Centre had prohibited export of onions with immediate effect to ensure availability to the domestic consumers at reasonable rates. Due to the sudden ban on onion export, several trucks and containers filled with onions had been stranded at ports. Subsequently, the government had allowed export of onions lying on ports in transit to all countries.

Earlier this month, the government announced a partial relief to onion exporters by easing restrictions on certain varieties of the staple for foreign shipments. "Empowering farmers and increasing their income, the government permits export of Bangalore Rose and Krishnapuram onions of up to 10,000 MT each," Minister Commerce and Industry Piyush Goyal tweeted.

Accordingly, 'Bangalore Rose' and 'Krishnapuram' varieties up to 10,000 MT each can be exported, subject to certain conditions. While the government banned the export of onions to control rising domestic prices, the move didn't really work. All-India retail price of onion reached Rs 51.95 per kg earlier this month, which is 12.13 percent higher than last year's price of Rs 46.33 per kg. Therefore, the government on October 23 relaxed the norms for import of onions while deciding to release the crop from the buffer stock in a calibrated manner.

The government has built a buffer stock of onions from the Rabi season this year. In order to moderate prices, onion from the buffer stock is being released in a calibrated manner from the second half of September to the major mandis and retail suppliers such as Safal, Kendriya Bhandar and NCCF and also to the state governments, the Centre said while adding that more will be done in the coming days.

To facilitate the import of onions, the government has relaxed the conditions for fumigation and additional declaration on Phytosanitary Certificate under the Plant Quarantine Order, 2003 for import up to December 15 this year. (With agency inputs)

(The above story first appeared on LatestLY on Oct 29, 2020 07:05 PM IST. For more news and updates on politics, world, sports, entertainment and lifestyle, log on to our website latestly.com).