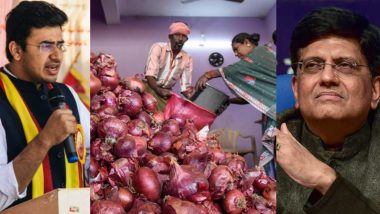 Seeking exemption of Bangalore Rose from the banned list, Tejasvi Surya wrote, "The ban on onion exports will hurt Karnataka farmers growing Bangalore Rose in Bengaluru Rural, Chikkaballapur and Kolar." He further added, "About 90 per cent of this variety is meant only for export — all to Southeast Asian countries — but farmers may have to sell it for lowly Rs 6 per kg. I request Honourable Commerce and Industry Minister Shri Piyush Goyal to exempt Bangalore Rose onions from the ban." Devendra Fadnavis Writes Letter to Piyush Goyal, Requests Him to Lift Ban on Exports of Onions.

Here's the statement by Tejasvi Surya:

It is to be known that the special variety is exclusively grown in Karnataka for export to Southeast Asian countries such as Malaysia, Singapore, Thailand and Taiwan. Following the ban on exports of cut, broken or powdered form of onions by the Union Ministry, the growers of Bangalore Rose onion are expected to be severely hit due to the ban, claim Karnataka horticulture department officials.

Previously in 2019 also, the Union government had banned the export of all varieties of onion, however, Bangalore Rose was given an exemption following Karnataka government’s request. On average, Karnataka produces 60,000 tonnes of Bangalore Rose variety of onions each year. As per an estimate, a Bangalore Rose onion farmer earns up to Rs 16-18 per kilo as profits. But, with this ban in place, both the sales and prices are expected to plummet.

Making a similar request, former Maharashtra Chief Minister Devendra Fadnavis wrote a letter to Piyush Goyal and had requested to lift the ban on onions. India had exported $198 million of onions in the April-June period of FY 2021, while $440 million in the entire 2019-20. Meanwhile, Bangladesh -- one of India's biggest importers of onions -- has sought the Union Ministry to lift the ban.

(The above story first appeared on LatestLY on Sep 16, 2020 11:27 PM IST. For more news and updates on politics, world, sports, entertainment and lifestyle, log on to our website latestly.com).