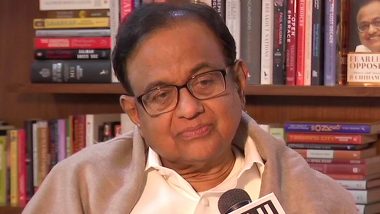 New Delhi, June 2: The Enforcement Directorate (ED) on Tuesday filed a chargesheet against former union minister P Chidambaram and his son Karti Chidambaram and others in connection with INX Media money laundering case. The chargesheet was filed in a Delhi Court. Last year in August, the former union minister was arrested by the Central Bureau of Investigation (CBI) in connection with the case. P Chidambaram Walks Out After Spending 106 Days in Tihar Jail, Welcomed by Jubilant Congress Workers.

After spending 106 days in prison, Chidambaram was released from Delhi’s Tihar jail on bail. The ED lodged a money laundering case against Chidambaram in 2017 in connection to the alleged flouting of norms to allow Rs 305 crore foreign infusion into the Peter Mukherjea-promoted media firm. P Chidambaram, After Getting Bail in INX Media Case, Says 'Not a Single Charge Framed Against Me in 106 Days'.

Meanwhile, the CBI is probing the corruption charges against Chidambaram in the INX Media case. Chidambaram was the Finance Minister when the Foreign Investment Promotion Board (FIPB) gave Foreign Direct Investment (FDI) clearance to INX Media in 2007. The CBI had registered an FIR on May 15, 2017. Thereafter, the ED lodged a money laundering case against him in the same year.

(The above story first appeared on LatestLY on Jun 02, 2020 11:34 PM IST. For more news and updates on politics, world, sports, entertainment and lifestyle, log on to our website latestly.com).