A man died after falling from a glider while paragliding in Kangra's Bir Billing on Sunday, Police have taken his body into possession and an investigation in the matter is underway, 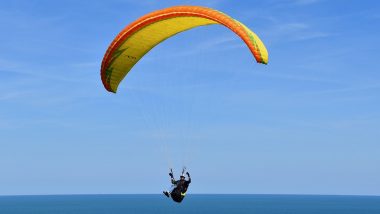 Shimla, November 22: In a tragic turn of events, a man dies after falling from a paraglider and died on the spot at Bir Billing in Kangra district of Himachal Pradesh on Sunday. According to reports, the deceased, identified as Sandeep Chaudhary, fell soon after the glider took off as its belt and harness went loose. Chaudhary, a resident of Mumta village in Kangra's Nagrota Bagwan who had come to Bir with his friends, had decided to go for paragliding which turned fatal for him.  Himachal Pradesh Shocker: Man Kills 75-Year-Old Father Over Money Dispute in Kangra, Arrested.

According to a report by the Times of India, minutes after taking off the safety harness and belts of Chaudhary's glider went loose and he fell from around 150 feet.  Chaudhary reportedly fell on the roof of a house near Bir. He died immediately on the spot after falling from the glider. Report informs that a case has been registered in the matter and the police have started an investigation in the case. Flash Floods in Himachal Pradesh's Kangra: Two Persons Reportedly Missing Due to Heavy Rain, Says Deputy Commissioner Nipun Jindal.

The body of the deceased has been taken into possession by the police and a probe in underway.  Preliminary investigation  reportedly revealed that harness of the deceased's glider  opened during the flight. However, exact cause of the fatal incident is yet to be ascertained. The Tribune informs that more than 30 gliders have crashed over the past five years across Kangra  and Mandi after taking off from Bir Billing causing the death of ten people.

(The above story first appeared on LatestLY on Nov 22, 2021 10:08 AM IST. For more news and updates on politics, world, sports, entertainment and lifestyle, log on to our website latestly.com).