Nearly 50 archaeological sites have been found in Prayagraj by a team from the department of Ancient History, Culture and Archaeology in the Ishwar Saran PG College. 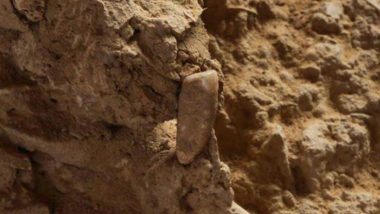 Prayagraj, Jan 14: Nearly 50 archaeological sites have been found in Prayagraj by a team from the department of Ancient History, Culture and Archaeology in the Ishwar Saran PG College.

The team conducted an archaeological village-to-village survey on foot in the vicinity of the confluence of the Ganga and the Yamuna rivers of Prayagraj, from Jhunsi to Shringverpur and from Daraganj to Kali Paltan in Kaushambhi district on both sides of the Ganga river.

The survey stretched for 70 km on the ground surface and 3 to 5 km (in width) on both sides of the river.

It was carried out under the direction of principal of the college and head of the department and project director, Professor Anand Shankar Singh and the project deputy director and Assistant Professor Jamil Ahmad, along with his team.

This was, perhaps, the first time that an archaeological survey was taken up in this area on such a large scale.

Professor Singh said: "The survey was conducted in more than 80 villages on both the shores of the river Ganga which fall under the Phoolpur, Sadar and Soraon tehsils of Prayagraj district and the Chail tehsil of Kaushambhi district.

Nearly 50 sites of archaeological importance have been marked and documented, from where, a large number of archaeological remains from Chalcolithic period (around 3,000 to 2,000 BC when copper was the dominant metal) to the Mughal period and later, have been found."

These remains consist of various types of potteries, terracotta and semi-precious stones, microlith (1cm to 8cm long stone tools), beads and tools of stone and iron and materials made of bone and ivory are important.

A detailed report of the survey has recently been sent to Indian Archaeological Survey, New Delhi for publication in their annual journal, 'Indian Archaeology - a Review'.

The college is working on sending a proposal for further excavation of selected archaeological sites near Kaurihar to Archaeological Survey of India (ASI), New Delhi.

These antiquities obtained from the Gangetic area have been kept for study by the researchers in the newly built Archaeological Centre of the College.

The vast majority of cultural materials excavated from this region clearly indicates the continuous and rich habitats of this region from the distant past.

The availability of antiquarian and artistic antiquities comes from almost all the antiquarian sites and provides valuable and useful information about the artistic tastes and everyday use of life and cultural stock of the people here.

It is noteworthy that the ASI, New Delhi, has licensed Ishwar Saran P.G. College for archaeological survey in this area.

(The above story first appeared on LatestLY on Jan 14, 2021 01:45 PM IST. For more news and updates on politics, world, sports, entertainment and lifestyle, log on to our website latestly.com).