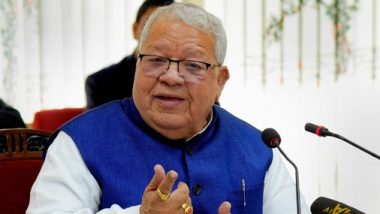 Jaipur, July 29: Rajasthan Governor Kalraj Mishra has cancelled the Independence Day 'At Home' event this year. According to a tweet by ANI, the Raj Bhavan said that the celebrations in the state have been cancelled due to COVID-19 situation. According to a statement issued by the Governor's office, the annual event which takes place at Raj Bhawan in Rajasthan stands cancelled this year due to the coronavirus situation in the state.

A press statement issued by the Raj Bhawan quoted Mishra saying that when the assembly session was adjourned on March 13, the number of active cases in the state was two and the session was adjourned in view of the spread of the pandemic. The Governor said that serious efforts will have to be made to control corona in the state. Ashok Gehlot Sends Third Proposal to Rajasthan Governor Kalraj Mishra, Seeks Assembly Session From July 31.

The COVID-19 tally in Rajasthan climbed to 38,636 with 1,072 fresh infections on Tuesday, a health department official said. The death toll due to COVID-19 in Rajasthan rose to 644 on Tuesday as 11 more people succumbed to the disease. Of the latest deaths, three were reported from Pali, two each from Bharatpur and Jodhpur, one each from Kota, Jaipur and Udaipur. A patient who was from another state also died, the official said.

In Rajasthan, Jaipur reported the maximum number of deaths in the state so far at 184, followed by 81 in Jodhpur, 53 in Bharatpur, 38 in Ajmer, 34 in Bikaner, 34 in Kota, 27 in Pali, 23 in Nagaur and 15 in Dholpur.  Rajasthan Health Minister Raghu Sharma informed that more than 71 percent patients in the state have been recovering after treatment while the fatality rate in the state has also come down to 1.68 percent.

(The above story first appeared on LatestLY on Jul 29, 2020 12:30 PM IST. For more news and updates on politics, world, sports, entertainment and lifestyle, log on to our website latestly.com).