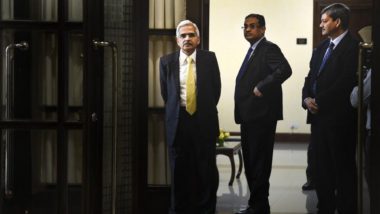 Mumbai, August 14: Days after keeping the repo rate and the repo rate unchanged, the Reserve Bank of India (RBI) on Friday announced that it will pay Rs 57,000 crore to the government for the current financial year. Earlier in 2019, the apex bank gave Rs 1.76 lakh crore to the central government after approving all the recommendations of the Bimal Jalan-led expert committee.

According to reports, published in the Economic Times and NDTV, this year RBI will pay Rs 57,000 crore to the Narendra Modi-led Union government. However, the central government had budgeted a dividend of Rs 60,000 crore from the central bank and other state-run financial institutions. RBI Monetary Policy: Repo Rate Unchanged at 4%, Reverse Repo Remains Unchanged at 3.3%.

The recent development arrived days after the government's fiscal deficit hit a record Rs 6.62 lakh crore in the April-June period due to COVID-19 pandemic. It is to be known that the central bank pays the government a dividend each year so that the amount help the government meet its financial targets.

In 2019, after the Bimal Jalan-led expert committee's recommendations were approved, the central bank approved to transfer Rs 1,23,414 crore of surplus for the year 2018-19. Along with this, the central board of the apex bank gave its nod to transfer a sum of Rs 52,637 crore of excess provisions identified as per the revised Economic Capital Framework (ECF).

Meanwhile, on August 6, RBI Governor Shaktikanta Das announced to keep the repo rate unchanged at 4 per cent and the reverse rate at 3.3 per cent. He stated that the decision was taken in the central bank's Bi-monthly Monetary Policy meeting. In May, the MPC cut the repo rate by 40 bps to 4 per cent in order to maintain its accommodative policy stance. The RBI has already reduced the repo rate by a total of 115 basis points since February, on top of the 135 basis points last year.

(The above story first appeared on LatestLY on Aug 14, 2020 04:18 PM IST. For more news and updates on politics, world, sports, entertainment and lifestyle, log on to our website latestly.com).