The Aam Aadmi Party (AAP) government on Monday launched the second phase of "Red Light On, Gaadi Off" in Delhi amid rising pollution levels in the national capital. Delhi Deputy Chief Minister Manish Sisodia and Environment Minister Gopal rai were also present at the occasion. 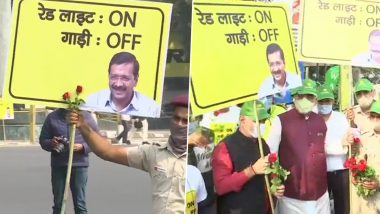 Sisodia said, "We successfully asked people to switch off cars at red lights. Fifteen days of Ist phase have gone well. Now we're launching IInd phase." The campaign was launched by CM Arvind Kejriwal on October 21 in all 70 constituencies of the national capital. ‘Red Light On, Gaadi Off’ Campaign’s Second Phase to Be Launched From November 16–30: Environment Minister Gopal Rai.

The Environment Minister had also thanked the people of Delhi for contributing and playing their part in switching their vehicles off on the traffic signals to combat pollution. In the second phase also around 2500 marshals will be deputed on the 100 junctions in 11 districts for the effective implementation of the campaign.

The morning after Diwali celebration, a thick blanket of noxious smog enveloped the national capital and shot up the pollution in the city to "emergency' level on Sunday where the hourly average concentrations of PM 2.5, a deadly pollutant, touched more than 1000ug/m3. The overall air quality of Delhi is in the lower end of the Very Poor category on Monday.

(The above story first appeared on LatestLY on Nov 16, 2020 04:19 PM IST. For more news and updates on politics, world, sports, entertainment and lifestyle, log on to our website latestly.com).