Reports inform that the accused, a 31-year-old woman, a homeopath doctor by profession, killed her mother and younger sister and later tried to end her own life at their home by consuming 26 sleeping pills. 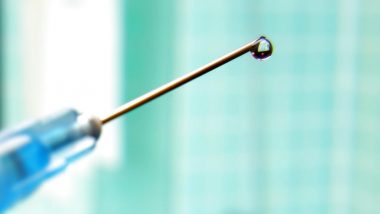 Surat, August 23: A murder incident has come to light from Gujarat's Surat where a doctor allegedly killed her mother and sister by giving them heavy dose of anesthetic drug. Reports inform that the accused, a 31-year-old woman, a homeopath doctor by profession, killed her mother and younger sister and later tried to end her own life at their home by consuming 26 sleeping pills. According to a report by TOI, the incident was reported from the Katargam area of Surat on Saturday. Gujarat: Woman Doctor Kills Mother and Sister With Injection, Attempts Suicide by Consuming Sleeping Pills in Surat.

The accused, identified as Darshana Prajapati, injected a heavy dose of the anesthetic drug to her mother Manjula, who is 59-year-old and on her 29-year-old younger sister Falguni, who is a school teacher. However, timely action by her elder brother Gaurav helped save the life of the accused. After the incident was reported, the cops booked Darshana for the murder of her mother and sister. Darshana practices as a homeopath doctor in her private clinic. Depressed Ludhiana Teacher Ends Life by Setting Herself Ablaze, Leaves Suicide Note Asking Mother for ‘Forgiveness’.

The incident came to light after a complaint was lodged by Gaurav in Chowk Bazar police station. After a probe was launched, police recovered a suicide note from the home in which Darshana did not wish to live as she was fed up of life. In her statement, the woman that her mother and sister were dependants on her for most of their needs and she thought that their life would become miserable after her death, hence she killed them.

According to the TOI report, the accused gave her mother and sister 10 ml injection of an anesthetic drug whose normal dose for patients is just 2 ml. She tried to end her own life too and consumed sleeping pills as there was no anesthetic drug left at home. In her statement, the accused confessed that she gave the injection to her mother and sister saying that it was a pain reliever since they both had joint pain.

The report quotes Gaurav saying that there were no issues among the family members. Cops claimed that further investigation after Darshana recovers will help to know the exact cause.

(The above story first appeared on LatestLY on Aug 23, 2021 12:47 PM IST. For more news and updates on politics, world, sports, entertainment and lifestyle, log on to our website latestly.com).