The management of the Ram Temple Trust funds that have crossed Rs 3,000 crore, has now been entrusted to corporate giant, Tata Consultancy Services (TCS), which is developing a digital accounting software. 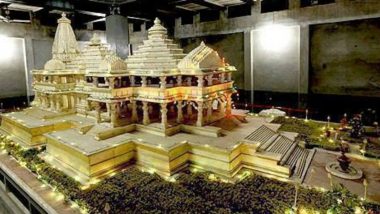 Ayodhya, October 24: The management of the Ram Temple Trust funds that have crossed Rs 3,000 crore, has now been entrusted to corporate giant, Tata Consultancy Services (TCS), which is developing a digital accounting software. The move comes after the trust faced allegations of corruption over land deals.

Ram temple Trust General Secretary Champat Rai confirmed the takeover. Sources said that the decision was taken at the behest of Rashtriya Swayamsevak Sangh (RSS), which had summoned three key Trust members to Mumbai four months ago for a closed-door meeting over the controversial land deals. Ram Temple in Ayodhya to Open for Devotees by December 2023.

TCS has set up its account's office at Ramghat near Ram Janmabhoomi and is scheduled to complete developing the software by December and begin digitisation and management of Trust accounts.

"We discussed our requirements with their software experts, who are now installing an accounting system. TCS will digitise and manage our accounts from December," he said.

When Trust coffers began to swell at the peak of the VHP crowdfunding campaign for the Ram temple construction, conmen hacked into the Trust website and created a fake portal to siphon off funds. Fraudsters also cloned cheques of the Trust's bank account and withdrew big money after the PSU bank's clearing house.

The Trust got embroiled in court cases over allegations of corruption in land deals, including purchase of nazul land and temples. Temple trust member Anil Mishra, said, "Digitization of accounts of Ram Temple Trust will be handled by TCS. Our team of chartered accountants will continue to maintain accounts of income and expenses."

(The above story first appeared on LatestLY on Oct 24, 2021 10:33 AM IST. For more news and updates on politics, world, sports, entertainment and lifestyle, log on to our website latestly.com).