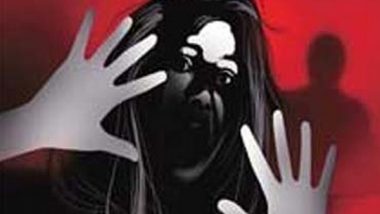 Varanasi, Nov 27: In a fresh incident of crime against the girl child, a sweeper allegedly sexually assaulted a minor girl in a private school in Varanasi district of Uttar Pradesh.

The accused has been identified as 23-year-old Sinku, who has now been arrested by police. Sinku was booked after the girl's parents filed a sexual assault complaint against him.

According to a report in The Times Of India, Police said the accused sweeper sexually assaulted the minor girl when she went to the toilet of the school on Friday morning. After the rape, he threatened and silenced her. The scared girl did not tell anything to the teachers. Tamil Nadu Shocker: Minor Girl Lured With Ice Cream by 52-Year-Old Neighbour, Sexually Assaulted

After freeing herself from the sweeper, The victim reached home and complained to her mother about the pain. When the family reached the school, first the school administration tried to suppress the matter, but in the meantime, the family members also informed the police. The police reached the spot and checked the CCTV footage of the school. At present, on the basis of the complaint, the police have registered a case against the sweeper. Further action is being taken.

(The above story first appeared on LatestLY on Nov 27, 2021 01:25 PM IST. For more news and updates on politics, world, sports, entertainment and lifestyle, log on to our website latestly.com).