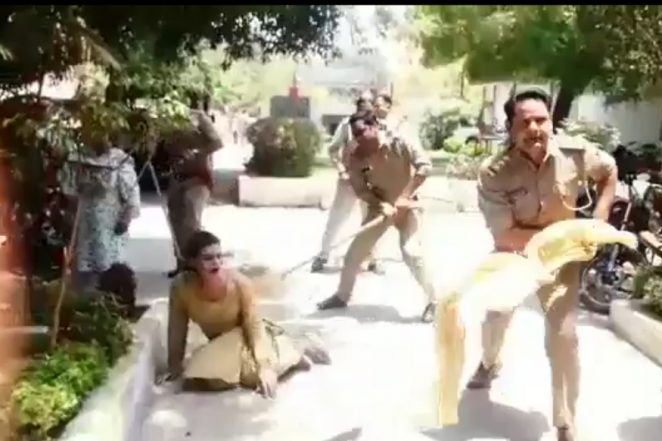 Meerut, June 10: In a shocking and inhuman act, Uttar Pradesh police personnel lathi-charged on the members of the transgender community in the premises of Lal Kurti police station in Meerut on Monday. Justifying the brutal action, police stated that these transgenders were allegedly asking for gifts and were reportedly creating a ruckus.

According to the incident, the transgenders went to a house in the adjoining Fawwara Chowk to give good wishes to the family and clashes erupted between two groups. With the verbal duel going out of control, the police were called in at the spot. Uttar Pradesh Shocker: Minister Upendra Tiwari Defines Nature of 'Rape', Says 'Rape of Minor is Rape, But Rape of Married Woman is Different'; Watch Video

#WATCH: Transgenders lathi charged by police allegedly after they created ruckus in Lalkurti police station,Meerut today. SSP says,'things have come to the fore,transgenders misbehaved,but force was used to control them. If force used was more than required,probe to be conducted' pic.twitter.com/3Fq4gl8EoX

Soon after the transgenders reached the Lal Kurti police station, they allegedly created a ruckus, after which the policemen baton-charged them. Video of the police thrashing the transgenders went viral, as the merciless beating by police with a baton was recorded on camera.

Reacting on the incident, SSP Mathura said, "The transgenders misbehaved and force was used to control them. If the force used was more than required, the probe will be conducted."